Transport Canada orders recall of all AT-ATs sold in 2017

Transport Canada orders recall of all AT-ATs sold in 2017 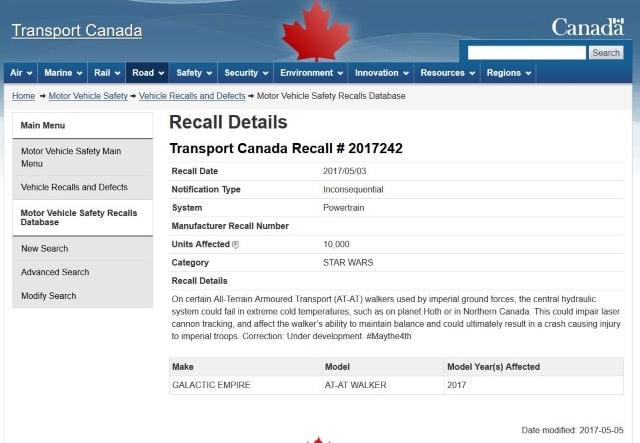 Who said government agencies don’t have a sense of humour? Yesterday was May 4th, the traditional day of Star Wars thanks to ‘May the 4th be with you’. There have been car-related Star Wars celebrations across the world and one of the best was from our own Transport Canada.

Transport Canada Recall # 2017242 was issued on 4th May for all Galactic Empire AT-AT Walkers manufactured in 2017. The recall reads ‘On certain All-Terrain Armoured Transport (AT-AT) walkers used by imperial ground forces, the central hydraulic system could fail in extreme cold temperatures, such as on planet Hoth or in Northern Canada. This could impair laser cannon tracking, and affect the walker’s ability to maintain balance and could ultimately result in a crash causing injury to imperial troops. Correction: Under development. #Maythe4th’

Here is the recall.
The link between the ice planet Hoth and Northern Canada is an amusing one, as we all know how cold it gets up there.

Enter forums and comment sections likening the government to the Galactic Empire and the call to arms for any civic minded rebel sympathizers to take up their snowspeeders and defend democracy.

2017 Kuat Drive Yards AT-AT
If there was such a thing as an AT-AT in production, it would find a perfect home in Canada. With full time AWD, excellent ground clearance, armoured underside, excellent visibility for 180 degrees and lots of cargo space, this would be the perfect vehicle for winter.

As an all-terrain vehicle it doesn’t have the best stability in the world but counteracts that with the ability to cover all kinds of terrain with ease. No tires to replace, no exposed bodywork to damage and very little in the way of trim to lose when hitting a pothole or other obstruction.

Car Nation Canada would gladly sell the 2017 Kuat Drive Yards AT-AT although our servicing department might not be so keen!

For a more practical mode of transport that can survive Canadian winters, visit your nearest Car Nation Canada location. We have some amazing deals on new and certified used vehicles of all shapes and sizes!