Prince Harry and Meghan Markle and the electric Jaguar E-Type

Prince Harry and Meghan Markle and the electric Jaguar E-Type 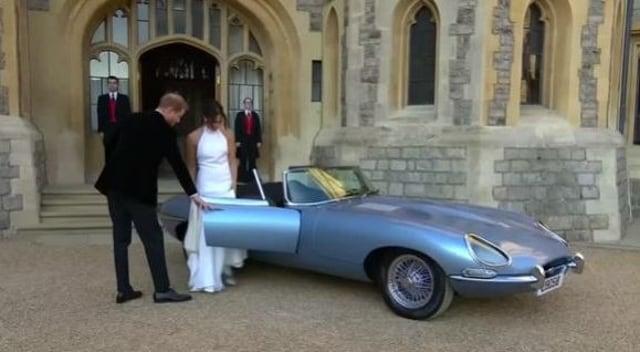 Apparently, the royal wedding of Prince Harry and Meghan Markle over the weekend was watched by over a billion people. Some wanted to see the dress, some wanted to see the pomp and circumstance and others wanted to see what the combination of a British state wedding and American influence delivered. For me, the highlight of the day was that fantastic electric Jaguar E-Type.

Of all of the enduring images of the royal wedding, the couple getting into the car and driving away was the best. With its custom licence plate with the date of the wedding and amazing presence, it was the ideal transport for the most photogenic wedding couple in the world.

The car was a genuine Jaguar E-Type from 1968 that had been converted and rebuilt by Jaguar Land Rover (JLR). The ice blue colour and complete originality shone on the day and for a while, only the strange silence from under the hood showed anything was amiss. It was only afterwards when commentators mentioned that it was a special electric edition that we could tell it wasn’t a true original.

Under the hood is a 40-kWh lithium-ion battery pack which powers an electric motor capable of the equivalent of 295 hp. A single speed transmission powers the rear wheels through the original rear differential to a set of original wire wheels. The Jaguar E-Type Zero can get from 0-to-100-km/h sprint in 5.5 seconds and has a 270km range.

To keep the original experience as much as possible, everything else is as stock as is practical. The original steering, braking and suspension systems are stock. In fact, JLR went to a lot of effort to ensure nothing was changed with the conversion. They say that should you want to replace the original straight six engine and transmission without having to retrofit or weld, you could.

The Jaguar E-Type Zero took around a year to design and build and is currently a one-off model. However, the company is open to making more should there be enough demand. It won’t be cheap though, with an estimated price of $480,000 each. That price will depend on features and options the same as it does with any car.

I suspect that even despite the price, after seeing the car on a billion TV screens last Saturday, Jaguar Land rover are going to be receiving more than a few enquiries about the Jaguar E-Type Zero.