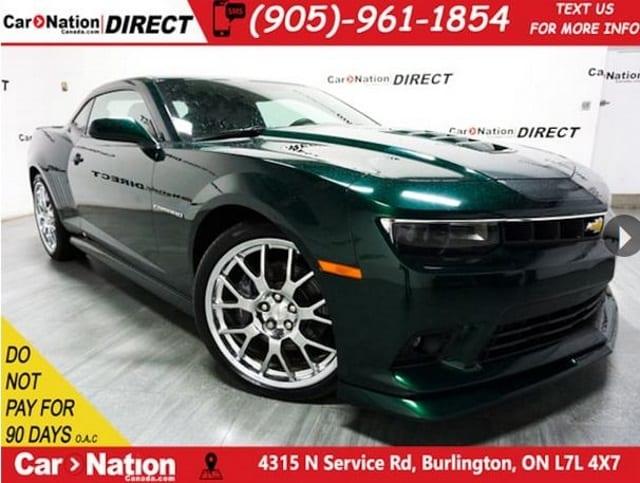 The guys over at Car Nation Direct have a 2015 Chevrolet Camaro SS 2SS Green Flash Edition for sale. This type of car doesn’t come around very often as special editions tend to be very sought after. When the car has less than 18,000km on it and is priced at only £32,988, it isn’t going to be here long!

The 2015 Chevrolet Camaro SS 2SS Green Flash Edition was named by fans because of the emerald green paintwork. It is a Camaro 2SS complete with the 6.2-litre V8 engine and a whole bunch of extras.

I’m not usually a fan of green cars or racing stripes but on this car all that changes. The depth and colour of the emerald green is superb and the mixture of gray stripes contrasts well with that richness of colour. Add those big alloy wheels and you have a fantastic looking car that sounds as good as it looks.

The SS comes with the 6.2-litre V8 engine that produces 426 hp and 420 lb-ft of torque. It uses a six speed automatic transmission to send power to the rear wheels.

The car also comes with a heads-up display, sports seats, rear park assist and Boston Acoustics 9 speaker audio. The Camaro is the complete package and competes on par with our own Dodge Charger and Ford Mustang. The three are often placed head to head as they are fairly even in terms of appeal, design and performance.

This version over at Car Nation Direct is a very low mileage car. Special editions are never around for long and this will be no exception. If you think the 2015 Chevrolet Camaro SS 2SS Green Flash Edition should be on your driveway, visit Car Nation Canada Direct, 4315 N Service Road Burlington, ON L7L 4X7 soon before this car is gone for good!