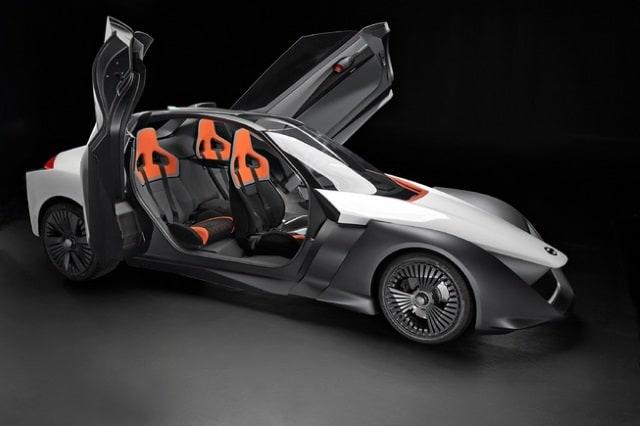 Nissan have given us more news on their BladeGlider concept EV. First seen a couple of years ago as an early concept, this newer version is much more advanced. Nissan have been working with F1 supremos Williams F1 to develop what is an amazing looking vehicle.

As far as we can tell, this version is very similar, in shape at least, to the one we saw when the project was first mooted. It is a long, thin vehicle with definite sporty lines, lots of aero touches and many, many points of interest. The centre from seat for the ‘pilot’ chief among them.

Rumours have it that one BladeGlider concept EV will be ferrying VIPs around Rio during the Olympics although we haven’t spotted it yet.

Here is a video of the vehicle.

BladeGlider concept EV
According to Nissan, the BladeGlider concept EV is purely electric. It is powered by two 130 kW electric motors, one on each rear wheel. These are powered by a 220kW lithium-ion battery that can power the vehicle from 0 -60 in less than five seconds and up to a top speed of 115 mph. Output is rated at 268 hp with 521 lb-ft of torque.

Using lessons learned from the best-selling Nissan Leaf, the BladeGlider concept EV has a lot going for it. Having a pair of motors driving the rear wheels has allowed the Japanese automaker to add torque vectoring technology which intelligently applies power to avoid understeer or allow drift.

While interesting, the press release material from Nissan fails to mention when, or even if, the BladeGlider concept EV will hit production. While it is difficult to envision a three seat vehicle being practical in the real world, it certainly looks good enough for production. If ever Nissan wanted to convert people from gas to electric driving, this is exactly the kind of vehicle to do it with!

However, in the meantime, keep an eye out for it at the Rio Olympics and we’ll keep an ear to the ground to find out if this is pure proof of concept or a vision of an electric driving future.