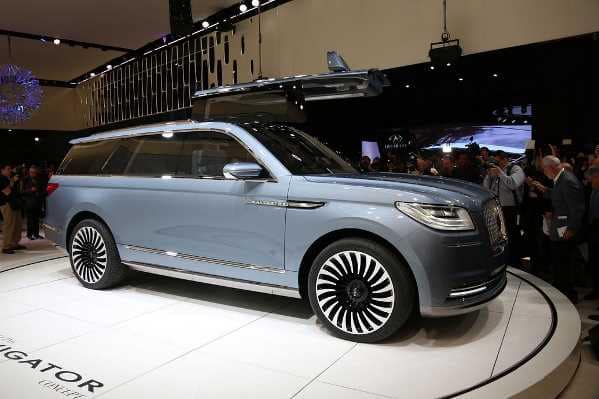 We have known for a while that there was going to be a new Lincoln Navigator at New York but we didn’t realise it was going to be quite so pretty. At first glance it looks like the love child of a Range Rover and a Bentley, but it is an original car all of its own.

The Lincoln Navigator Concept was shown last Monday night and got a very positive reaction. The new design brings the Lincoln Navigator Concept into line with the Continental and Lincoln MKZ. It’s modern, sleek and understated, which is perhaps an odd thing to say about an SUV the size of a small house. Yet it is quietly luxurious, which is apparently Lincoln’s intent.

The concept uses gull wing doors and extendable steps to offer the wow factor but once closed, the concept looks like a very tidy SUV. The single gull wing is a double width, comprising both a front and rear door. We certainly don’t expect either feature to make it to production.

This is a full size SUV that looks to have taken inspiration from current high tier SUVs. It’s a sleek design with a big front end, inset and angled headlights, big front grille, a high body and simple lines. We often say this but we think the design looks better for its simplicity.

Navigator Concept
Inside, it’s all leather as you would expect from a Navigator. Three rows of individual ‘Perfect Position’ chairs, lots of headroom, some teak woodwork and some nice design touches. Apparently inspired by yacht interiors, the inside of the Lincoln Navigator Concept is certainly a nice place to be.

At the back, a built in backlit closet type area showed us what was possible with a little imagination. While we doubt many family buyers would want a dressing room in the back of their SUV, it was a good showcase of what is possible if you have the space and the money.

Powering this beast is a 3.5-litre EcoBoost V6 that produces 400 hp through its twin turbos. We expect there to be a very slick automatic transmission and two and four wheel drive although neither were mentioned at the show.

If the production model looks and feels anything like the Lincoln Navigator Concept, it will do well. Whether it will do enough to compete more effectively against the Escalade remains to be seen, but we think the fight would most definitely be on!