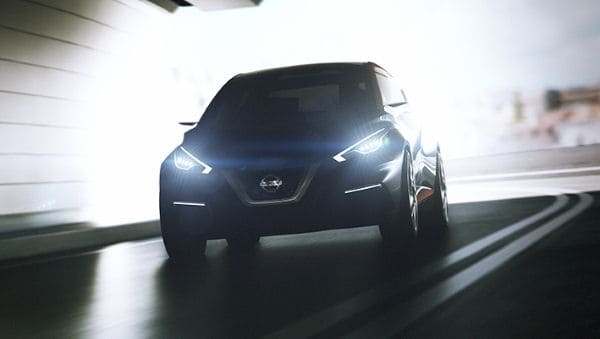 Nissan have
released a teaser image of a new concept car they will be unveiling at the
Geneva Motor Show next week. Called the Nissan Sway, the new car is a small
car, similar to the Nissan Micra. It will target the Ford Fiesta and other
small cars for a bigger market share. The Nissan
Micra has only just made it to Canada so we're wondering if the Nissan Sway
concept vision is to sit alongside the Micra or be the next generation of it.

The Micra is a huge seller in Europe, with hundreds of thousands of them on the
road. The combination of small footprint, low cost of ownership and good gas
mileage all combine to make a very attractive small car. Ideal for city living
and urban commuting. According
to Nissan, the Nissan Sway takes inspiration from the Juke and the Qashqai and
apply it to a much smaller chassis. While the teaser shot doesn't give much
away, the profile certainly has an element of Juke about it.

The low
front end, LED running lights, upward sloping flank all hint at something
Juke-like. The big front grille with the Nissan badge and squared off
windshield all look a little Qashqai too.

"Innovative
design and product planning gave birth to Nissan Qashqai and Juke, two of the
biggest automotive success stories of recent years. What would happen if the
company applied the same radical thinking and quality standards to one of the
most important sectors in Europe: the small hatchback?"

"The
Nissan Sway Concept is a glimpse at how a future generation of small Nissanmodels could look if the company's striking new design language was applied to
a European hatchback," says Nissan.

Rumors
within the industry says if the Sway hits production it will likely be the next
generation of the Micra. It will also herald a shift away from manufacturing in
India to move to France as per the Renault-Nissan Alliance. The concept is also
thought to use technology and design cues from the Renault Clio.