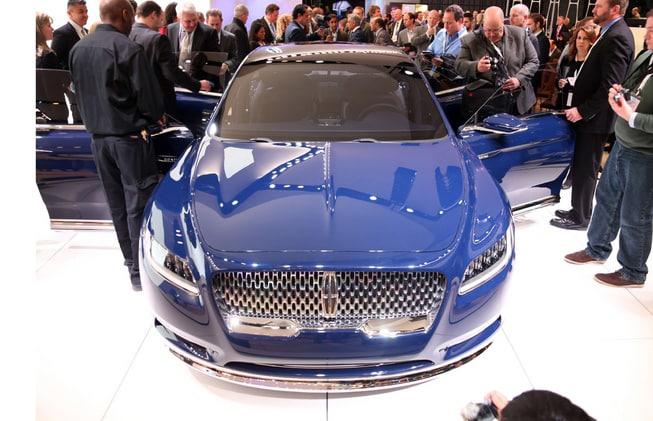 We saw the
Lincoln Continental Concept last week but didn't have time to look at it
properly. We're taking care of that right now.

Something
we don't have any mixed feelings about is the Lincoln Continental Concept. Love
them or hate them, Lincoln cars have a very particular character. The Lincoln
Continental Concept is a break from what we have come to expect from the
manufacturer and in a good way. It's so good that Bentley have accused Lincoln
of copying them. We're taking that as a complement!

The version
at the New York Auto Show was blue. A fantastic colour called Rhapsody in Blue.
The design is one of the best Lincoln have ever come up with. Ever. It looks a
bit Audi, a bit Bentley and also a lot Lincoln. It's a nice, modern shape that
shouts quality without being aloof. It's a triumph of design.

Up front we
have a big grille and a rounded front end. Smooth headlights draw the eye round
to the wheel arches and those lovely polished alloys. A chrome detail has the
model name across the wing and front door while that smooth line continues down
the length of the car.

Here are a
couple of videos of the car so you can see what we mean.

The Lincoln
will of course use a Ford engine, in this case a 3.0-litre EcoBoost V6.
Specific outputs and tech specs of the drivetrain and mechanicals were not
shared at the time.

Inside the
cabin, the upscale luxury look continues. There is acres of leather, miles of
chrome and lots of space. A large, active tine sunroof, adjustable aircraft
style seats, a big centre stack with chrome accents and lots of space in back
are just some of the highlights of the vehicle.

We love the
Lincoln Continental Concept. As much for the fact it delivers exactly what the
automaker needs to continue to survive as much as the fact they have delivered
a car we actually would like to own ourselves. Let's just hope the production
model, if there is one, isn't too distantly related.