Kia GT spied in the wild

Kia GT spied in the wild 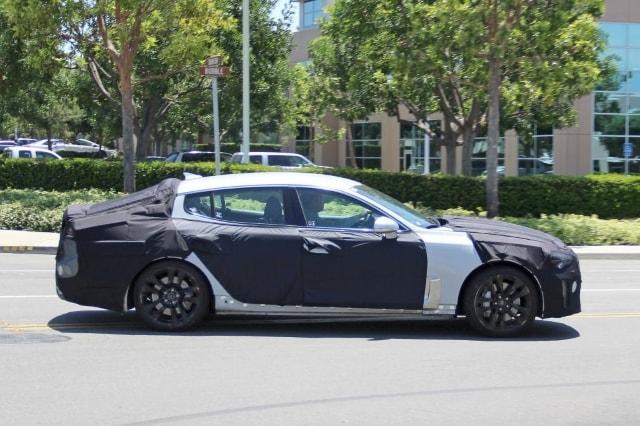 We have spoken about the Kia GT before after seeing it debut at the Frankfurt auto show back in 2011. Since then, little has been seen or heard about the Kia concept turned potential factory car. Until now. Those eagle-eyed guys at Motor Trend spotted the GT being tested out in Germany and again in California.

The image, caught by SpiedBilde, shows a very sleek looking Kia. Apparently built on a modified Hyundai Genesis G90 platform and using a V6 engine, this car is going to be good. The motor allegedly slated for use is a 3.3-litre twin turbo V6 capable of 365 hp and/or a 5.0-litre V8 that generates 415 hp. Nothing is confirmed yet though.

The design from what we can see under the camouflage looks good. It’s long, sleek, narrow and shaped to go fast. Twin pipes at the rear hint at something powerful under the hood while big wheels, a planted stance and an aero design gives us a lot of hope for a performance car at last from Kia. As do the big brakes that sit behind those alloys.

As you can see from the image, the design of the Kia GT is very similar to the one we saw as a concept. A four door coupe design with a long hood and sloped rear. The lighting has been pared down from the concept, presumably to fit into production and we assume the rear suicide doors will have gone too.

As always, a lot of the technical specifications are guesswork. Kia has let out a few hints over the past months, as has Hyundai. Yet while we think we know the platform and engine, we don’t actually know anything. As for looks? Well you can see for yourself. Camouflage can cover a lot of things but the basic shape of the vehicle isn’t one of them.

We are excited to see the Kia GT unveiled once and for all. When that will be is another thing we don’t yet know. Until then, we’ll have to depend on spy shots like these.

Check out the current range of Kia cars at Georgetown Kia, 199 and 314 Guelph Street, Georgetown, Ontario.