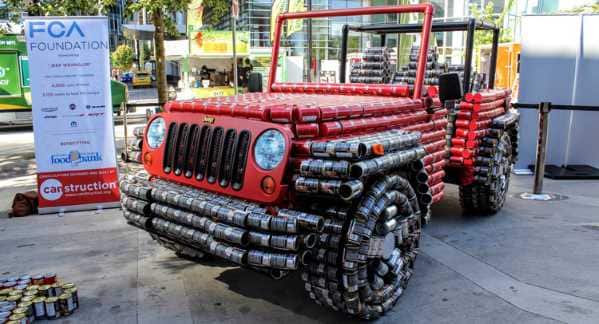 To
celebrate Canada day on Wednesday, Canadians got up to all sorts of things. One
thing that really caught our eye was a project with FCA, some school children
and 4,500 food cans. This tin can Jeep was the result. This is one special edition
Jeep you're not going to want to drive!

The FCA
Foundation got together with Canstruction Inc. which is a non-profit that seeks
to raise awareness of hunger and poverty while also promoting science,
technology, engineering, and math. The model took teenagers over twelve hours
to build out of 4,500 food cans. The cans built the Jeep Wrangler and the food
from the cans provided 3,120 meals to users of the Greater Vancouver Food Bank
Society.

The
construction took place at Vancouver's Canada Place under the watchful gaze of the
passing public.

FCA have
done this before. The first was in 2012 and used over 30,000 cans to build a
Grand Caravan for the vehicle's 30th birthday in Toronto.
Canstruction Inc. was involved then too and provided 2,000 food baskets through
its network. A Ram truck was also built in Calgary in 2014 during the Stampede.
What vehicle will they choose next?

It's a
noble idea with a neat twist. Give some kids a cool project to do and do some
good while you're there. All the while getting a bit of positive PR for your
brand.

From the
FCA press release:

"The
automaker's famed Jeep brand and the FCA Foundation - the charitable arm of FCA
US LLC –partnered with the international non-profit organization Canstruction®
Inc. to build the vehicle, can-by-can, at Vancouver's renowned, waterfront
Canada Place.

"Assembled
by local-area students aged 12-18, this special Wrangler will provide more than
3,120 meals to the Greater Vancouver Food Bank Society when donated after our
nation's 148th birthday.

"This
unique Canada Day Canstruction project not only serves as a tool to raise
awareness for issues of hunger and poverty in our country, it also demonstrates
to the students involved how critical – and fun - subjects like science,
technology, engineering and math can be," said Reid Bigland, President and
CEO, FCA Canada.

"This
project also provides a wonderful opportunity for us to give back to a
community that has helped drive FCA's success in Canada. In 2014 and
year-to-date, FCA is the top-selling automaker in B.C. It's fitting too, that
the subject of today's Canstruction is the iconic Jeep Wrangler, the
top-selling small SUV in Canada and a great fit for the rugged terrain of
British Columbia."

You can
check out the real Jeep Wrangler at Unique Chrysler Dodge Jeep Ram, 915 Walkers
Line, Burlington, ON  L7N 3V8.