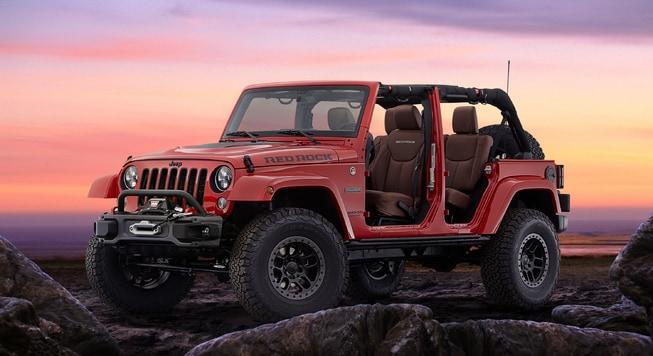 If you have
been watching any of the SEMA coverage, you will likely have seen the bright
red Jeep Red Rock Special featuring front and centre. It certainly caught our
eye and for all the right reasons.

Other off
road upgrades include a solid Dana 44 front and rear axles and a Rock-Trac
transfer case with a 4.10 axle ratio. Red Rock detailing will appear inside and
out.

FCA said
the Jeep Red Rock Special will commemorate the 50th anniversary of
the Easter Jeep Safari, so 50 of these special editions will be built. Somehow
we don’t think these will take long to sell out if they haven’t already!

The 2016
Jeep Wrangler continues its fine tradition of being a solid, go-anywhere
vehicle that stands out from the crowd wherever it might be. New for this year
are some new colours, a new Black Bear Edition and some minor trim updates.

The design
of the 2016 Jeep Wrangler is iconic. No matter where you are in the world, you
know this car when you see it. Ever since those first Jeeps were shown on TV
during the 1940s, it is a design that has stayed with us and stayed relevant.
Sure it’s not svelte highway cruiser, but that’s not the Wrangler’s forte.

The cabin is
all about function over form and we’re okay with that. It’s still a nice place
to be, with supportive seats, a nice centre console, clear instrumentation and
some good materials. The one thing we really do like is how Jeep have combined
that heritage feel with the modern technology that we demand.

The
Wrangler is available as either a two door four seater and a four door five
seater. It uses a 3.6-litre Pentastar V6 that produces 285 hp and 260 lb-ft of
torque and is mated to a six speed manual or five speed automatic transmission.
Four wheel drive is standard and includes high and low ranges for off road use.

One final
strong point about the Jeep Wrangler is the aftermarket parts scene. According
to Jeep, almost every owner upgrades their Wrangler with something from Mopar.
There really is something for everyone and regardless of the use you’re
planning to put your Jeep to, there are some upgrades to make it happen.