What you get when you cross a Tesla, Kia Soul and a Shelby Cobra

What you get when you cross a Tesla, Kia Soul and a Shelby Cobra 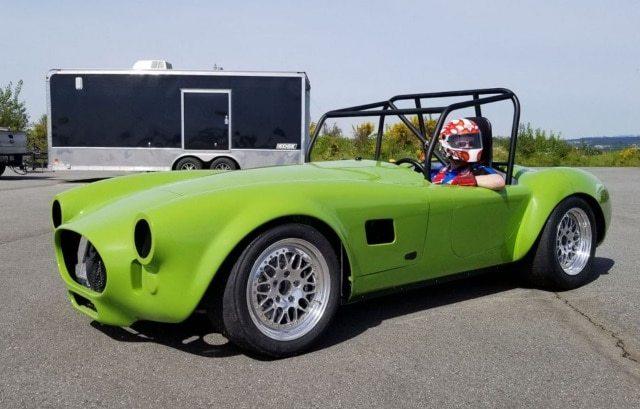 For anyone who likes cars, the Shelby Cobra has to be one of the ultimate drives. A small, light body, big engine, lots of grip and awesome amounts of fun, the Cobra may be 55 years old but it is still going strong. Stronger still thanks to the innovation of some Canadian engineers.

The original Cobra was dreamed up by Carroll Shelby when he put a Ford V8 into a lightweight AC Ace chassis. An instant classic was born. Now, some clever Canadian engineers have taken that initial idea and brought it into the present day. Featured on Green Car Reports, the car is a triumph of both vision and engineering.

The engineers have taken a Shelby Cobra body, a custom chassis, the electric motor from a Tesla Model S and the battery pack from a Kia Soul. The result is a race car that destroys the competition.

According to the piece, the lithium-ion batteries of the Kia Soul were the only ones to fit the profile. They offer continuous 300 kWh power output, are light and have the capacity for decent range. At race pace, the batteries were capable of powering the car for 16 laps of the 1.4 mile circuit.

The Tesla motor is capable of 416 hp but had been dialled back to 295 hp to better manage temperature. Nevertheless, in the video, the car slices through the competition as though they weren’t there.

As you can see, the car cuts through the competition like butter and broke the lap record while it did it.

We all love the roar of as big V8 or even a V6 but that kind of performance is surely where the future of motor racing is!

The entire team here at Car Nation Canada wishes all our readers and valued customers a Happy Christmas. We don’t be here Monday or Tuesday but will be back to normal Wednesday. We hope you have a very happy holiday in the meantime!