There may well be a Ram 1500 Hellcat in our future

There may well be a Ram 1500 Hellcat in our future 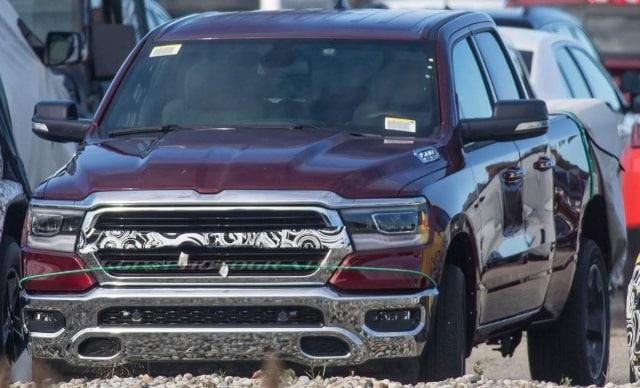 Among the attention garnered by the 2019 Ram 1500 last week, FCA may have dropped a very veiled hint about a plan to deliver the often fantasized about Ram 1500 Hellcat.

The reference is admittedly oblique and very subtle but it is a hint. At least we, and other motoring websites think it is. The first hint was a series of ‘insider tips’ from apparently trusted sources within the company indicating that there may be a V8 Ram 1500 on the way. The second is very tenuous indeed but no less intriguing for all that.

It was spotted by the guys art Allpar and involves marketing material provided at the launch of the 2019 Ram 1500 last week. An interior shot of the driving position includes the touchscreen in the centre stack. Someone thought to zoom in on that touchscreen and saw the time, 7:07. There is now a strong feeling among some that this refers to the 707 hp that the hellcat V8 delivers.

While this may seem like a bit of a reach, FCA have form for this kind of hint. The original Challenger Demon was teased in exactly this way.

Ram 1500 Hellcat
The 6.2-litre V8 Demon engine produces 707 hp, but is capable of more as we have seen. Up to 840 hp in a tweaked Challenger SRT Demon. The 7:07 reference seems obvious when you look at it like that but it is far from definitive.

The Ram is one of the few vehicles in FCA’s North American stable that doesn’t have a Hellcat or performance V8 version, so maybe this could be it. We did see the Rebel concept back in 2016 but nothing seemed to have happened with that. Nobody at FCA is saying anything and aside from the insider and this hint, nothing leads us yet to believe that a Ram 1500 Hellcat is anything but wishful thinking.

However, The Ford Raptor is a monster and as we all know, the higher a truck goes, the more tempting a target it becomes. I would be amazed if FCA didn’t have some kind of plan to compete with the Raptor given that they have a similar platform in the Grand Cherokee Trackhawk and the Hellcat engine already.

While we may be understating the work involved slightly, Ram just needs to nail in a four wheel drive system to the Ram 1500 and drop the Hellcat engine into it. All the rest can come from the FCA parts bin.

Whether this will ever be real is still very much up for debate. Nevertheless, it gives us motoring fans something to chew on until we can get our hands on the new 2019 Ram 1500!

Visit Unique Chrysler Dodge Jeep Ram, 915 Walkers Line, Burlington, ON  L7N 3V8 for all the latest on the 2019 Ram 1500 or for some great deals on the current range.