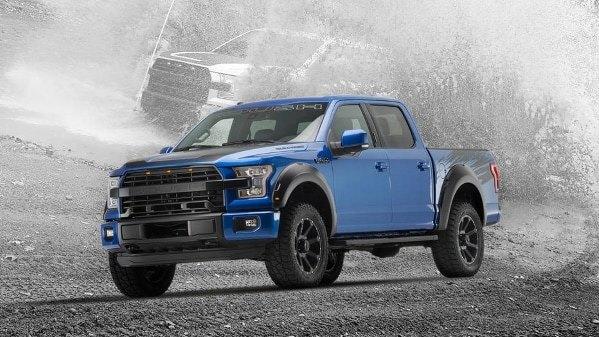 Can’t wait for the Ford Raptor? Want a Ford F-150 with a little something special? Have $55,600 burning a hole in your pocket? Roush Performance might have the answer. Not content with Mustangs, the tuner has turned their attention to the F-150, with simply stunning results.
The Roush F-150 is a direct competitor to the Ford F-150 Raptor and will gladly take it on. It has the looks, the upgrades and the performance to go head to head with Ford’s performance package and we genuinely don’t know which is best.
Roush F-150 SC
The Roush F-150 SC takes a stock F-150 truck and bolts on some extreme upgrades. First and foremost is a TVS 2300 supercharger that it bolts onto a 5.0-litre Coyote V8 engine. That takes power output from 385 hp up to 600 hp and torque from 387 lb-ft to 557 lb-ft.
Other upgrades includes a Fox 2.0 Performance Series suspension setup with uprated coilovers and rear shocks. Roush have added their own 20 inch wheels with some Mickey Thompson tires and a Roush side exhaust.
The signature tunable Roush Active Exhaust will apparently arrive later in the year.
To finish, Roush have added some exterior graphics and body kit elements to let it stand out a little further from the crowd. Those include a new grille, new wheel arches, front bumper and hitch cover.
While the Roush F-150 SC goes head to head with the Raptor, it has Ford’s backing. Roush works closely with those at the Blue Oval in everything it does and they apparently approved this project very early on. That’s confidence for you!
But let’s be honest, two very good looking, awesome sounding trucks is only going to elevate the Ford brand in the eyes of those who like such things. Even in those who don’t. The F-150 is such a common sight on our streets that it has become synonymous with contractors and those who need to get places.
A couple of performance variants of that truck that you can either hear coming from a block away or see cruising past you on the highway is no bad thing for an automaker to have to contend with.
If you would like a Roush F-150 SC, you’ll need a V8 F-150 and up to 12 weeks. Roush will add their upgrades on higher trim trucks but the supercharger is V8 only. The upgrades are a $22,600 (U.S.) addition to the sticker price of the truck but is worth every cent as far as we are concerned!
Visit Northway Ford Lincoln, 388 King George Road Brantford ON N3S 3N2 and order your Ford F-150 today!