The fastest street-legal Viper ever

The fastest street-legal Viper ever 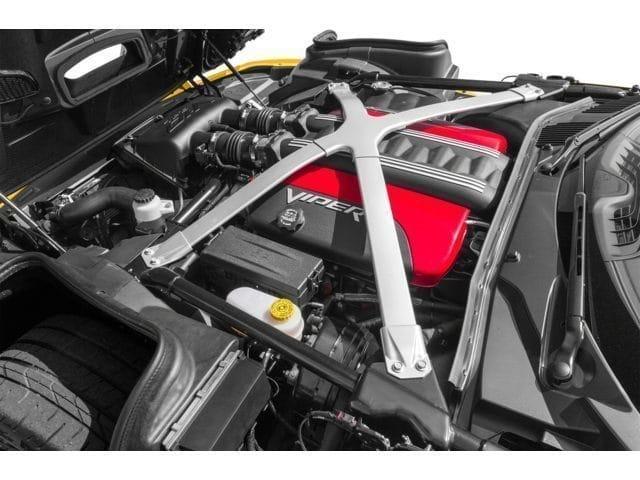 If the
standard Viper simply isn’t enough for you, Dodge are listening. They have just
released the 2016 Dodge Viper ACR (American Club Racer) for those few people who thought the
snake just wasn’t mean enough for their tastes. It is the fastest ever
production Viper and boy is it fast!

From that
very first glance it is clear to see that the 2016 Dodge Viper ACR is serious. At
the front is a splitter, brake ducts and LED lighting. The hood is full of holes
to allow the monster motor to breathe while black alloy wheels and red Brembo
brakes all shout track day. The high rear spoiler and stripe down the centre of
the car just add to that character.

The 2016
Dodge Viper ACR is a mean looking car, one that would definitely look at home
on the track. Yet it is totally road legal.

Here it is
in action!

So, to the
details. Under the hood is an 8.4-litre V10 engine that produces a massive 645
hp and 600 lb-ft of torque. That makes it one of the most powerful non-turbo
engines ever. Dodge says it has the most torque of any production normally
aspirated engine on the road.

The
interior of the 2016 Dodge Viper ACR has been pared back to save weight and to
look “tracky” but not so much that it’s bare. It is a simple but very effective
interior with lots of carbon fibre and Alacantra, in black naturally, to give
it an air of the sporty while also being comfortable.

“The Viper
has always been more of a street-legal race car than a track-capable streetcar,
and the new 2016 Dodge Viper ACR is the fastest street-legal Viper track car
ever,” said Tim Kuniskis, president and chief executive of the Dodge SRT Brand
in North America, in a press release. “Our goal is to arm our enthusiasts with
the ultimate Viper track car to dominate road courses around the world.”

The 2016
Dodge Viper ACR is due in Q3/Q4 2015 with pricing having just been announced.
If you want one of these awesome Vipers, you’re going to have to move fast as
they won’t be around for long!