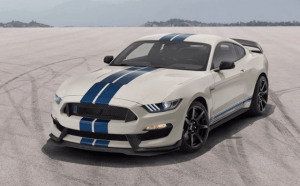 One of the most iconic performance cars in the world will be ending production this model year. The 2020 Ford Mustang Shelby GT350 and GT350R will both be bowing out at the end of this production run. We thought this was coming but not exactly when. None of the Ford forecasts and production schedules we […]

Shelby American has done it again. They have announced yet another performance car that takes one of our favourites and turns it into a snarling, fire breathing super version of itself. This time, they have announced a Mustang they are calling the Super Snake. The 2015 Mustang Super Snake takes a Ford Mustang GT, […]

It seems the Shelby company have been busy these last months. Hot on the heels of the Mustang Shelby GT350 we discussed on Tuesday, we now see a new model based on the Ford F-150 Raptor, nicknamed the Shelby Baja 700. The Ford F-150 Raptor is already an awesome truck. One we always try […]