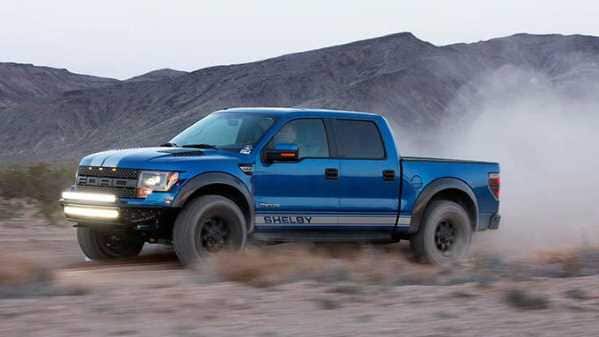 It seems
the Shelby company have been busy these last months. Hot on the heels of the Mustang
Shelby GT350 we discussed on Tuesday, we now see a new model based on the Ford
F-150 Raptor, nicknamed the Shelby Baja 700.

The Ford
F-150 Raptor is already an awesome truck. One we always try to take out
whenever we can. It's awesomely quick, fantastic to drive, has all the
technology you'll ever need and can go anywhere. The Shelby Baja 700 takes it
one step further.

The Shelby
Baja 700 is essentially a tuning package that uses the Raptor as a platform.
Thanks to the liberal application of a new Whipple supercharger, throttle body,
injectors, heat exchanger and Borla exhaust, the new truck is faster than ever.
The engine now has a rating of over 700 hp!

To control
all that power, Shelby also uprated the suspension with 3-inch King coilovers,
bypass rear shocks, Rogue Racing upper and lower control arms. New 18 inch black
alloys are shod with BFGoodrich K02 off-road tires to provide that all-terrain
ability. We fully expect an upgraded brakes setup to complete the package
although no details have yet been released.

As you
would expect, there is some special exterior and interior trim to celebrate the
tuner's efforts with the Shelby Baja 700. Exterior graphics adorn the hood,
door sills and tailgate. Inside, new seats and a plaque with the vehicle's
serial number and a few minor upgrades are all you need.

The
standard Ford F-150 SVT Raptor has performance enough for most of us. It's 6.7-litre
V8 engine already produces 411 hp and standard guise. The addition of a huge
Whipple supercharger and performance upgrades adds almost 300 hp to that
figure. It's no small power upgrade and will need nerves of steel to get the
best out of it!

There will
only be 50 Shelby Baja 700 models built and they are on sale now!