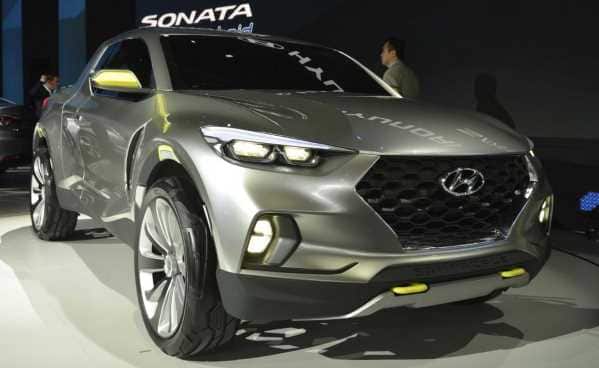 The Hyundai Santa Cruz was one of the standout concepts at
Detroit. Not only does it look fantastic, it's also an attempt to cross
segments. With a body that's half car and half pickup truck it's more like an
Australian 'Ute than anything we see over here.

We have seen attempts at this kind of chassis before with
the Ford Explorer SportTrac, which didn't do all that well. From looks alone we
think the Hyundai Santa Cruz would do better.

Hyundai said the concept is designed to offer a flexible
vehicle for younger drivers that offers the convenience of a pickup with a much
smaller footprint. The chassis is wide to offer stability, yet the overall size
is still reasonable. This is to address the smaller city roads, ever-shrinking
parking spaces and the many size restrictions of our urban environments.

According to Mike O'Brien, Hyundai Motor America’s VP of
product planning, the work to make the Hyundai Santa Cruz a reality has already
been done. Rather than just put a design together and get down to
practicalities later, the Santa Cruz is almost ready for production. Eighteen
months has been spent completing engineering feasibility, so not a lot will
need to happen if this concept were to hit production.

The idea is to combine a more practical footprint with an
equally practical engine. Hyundai has their 2.0-litre diesel engine in mind. It
delivers 190 hp and 300 lb-ft of torque which would give great gas mileage with
enough get up and go to cope with urban driving. It could also allow a tow
rating of around 2,500 pounds.

Hyundai have done a lot of research into the Santa Cruz.
They spend months asking customers and potential customers what they wanted and
say this concept is the result. It's a compromise between the increasing switch
to crossovers and the demand of governments for improved gas mileage.

A need for an open truck bed suitable for daily life and
weekend adventures is also a key requirement according to Hyundai. This smaller
bed is ideal for “urban adventurers” who don't need to haul tons of building
materials around. The load bed would be great for camping gear and no doubt
there would be accessories for bikes, kayaks and other things we carry around.

The Hyundai Santa Cruz concept is a great looking thing. If
it does hit production and looks as good as this does, we think it will be a
sure fire hit. We would like to see a gas engine offered as well as diesel and
if Hyundai do that we think they will have another hit on their hands.