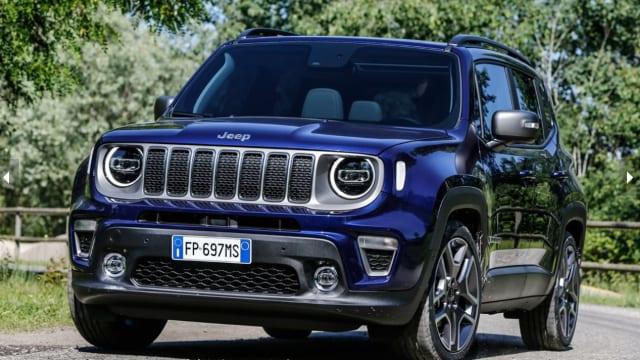 A renewed Jeep Renegade was shown last week at the Torino Auto Show in Italy. While still a relatively young model, a refresh of its looks and features is always welcome. A refresh is the apt term though as this new Jeep keeps the essential characteristics of the existing model while bringing everything right up to date.

The model we got to see was European spec, but we don’t think much will change on its journey across the Atlantic.

Jeep Renegade
The Jeep Renegade is a great SUV. It’s capable but not bulky, friendly but not too docile and it’s a Jeep. This refreshed version features new headlights and taillights with LED outlines. The unique cross shape of the rear lights remain while the shape changes slightly. New front and rear bumpers also look to feature alongside new alloy wheels.

Inside, the interior has been tweaked too. A larger, more detailed touchscreen features now and the controls that surrounded the old unit have gone. The rest is the same cool and quiet interior we already know with comfortable seating, lots of head and leg room and decent amounts of cargo space for its size.

Under the hood is going to be a couple of new engines. The euro version gets a 1.0-litre turbo three cylinder that generates 118 hp and a four cylinder 1.3-litre that’s good for 148 hp or 178 hp with a turbo. These will join the existing 1.4-litre four cylinder or the 2.4-litre four that currently serve the range. We don’t know if we will get these engines or not as yet.

There was no mention of suspension, drivetrains, transmission or off road capability at the show. Presumably those features will be announced closer to launch this summer.

2018 Jeep Renegade
The 2018 Jeep Renegade is a surprisingly effective compact crossover that sells in numbers. It’s another Jeep that performs as well on the school run as it does in the wilderness and has genuine off road chops. With a funky design and nice character, there is a lot to be said for owning a Renegade.

The design is typical Jeep. Chunky, unfussy and great to look at. The typical Jeep front end is present, as is the upright panels and rear end. There are no artistic flourishes or fluted panels on this vehicle. It’s a Jeep, you’re buying rugged comfort and not a design masterpiece. That said, I think it’s still a nice car to look at.

Inside, the cabin is equally rugged but also comfortable. While advertised as a five seater, it is more likely a four. Rear space is still comfortable for two but would be cramped with three. Behind the fold down rear seats is a decent amount of cargo space considering the modest footprint.

The Renegade has actually won me over. The Jeep has character, is an easy drive and has proper off road ability. Those three things are hard to achieve at this price!