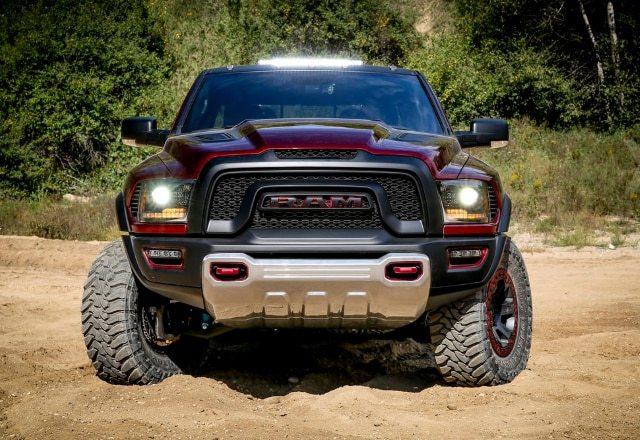 FCA have finally green-lighted the Ram TRX for production. The Tyrannosaurus Rex is designed to specifically address the dominance the Ford F-150 Raptor currently has in performance trucks and will sit alongside the Ram Rebel to offer another option for buyers.

The Ram TRX has been part of the rumour mill for the longest time. Many of us were secretly wishing FCA would come out and say it was being produced but also feared it never would be. Fortunately, those fears were unfounded and we now find ourselves in a position where the automaker has officially confirmed the Ram TRX will be hitting production.

The announcement was part of the FCA Five year plan announcement, which I will be covering this week.

Ram TRX
We saw the concept a couple of years ago and loved it. It has all the classic lines of a Ram 1500 but with the ruggedness turned up to 11. It rides higher, looks more aggressive and has all the trapping performance truck enthusiasts love, including the Hellcat V8.

Production will apparently begin in a year or two once the old Ram Heavy Duty line at the company’s Mexico location has been retooled. That’s the same plant that will be manufacturing Ram’s new lighter truck. While specific dates were not mentioned, we expect the Ram TRX to hit auto shows next year and then arrive at dealerships in 2020/21.

The Ram TRX uses the 1500 frame and body and continues its design philosophy, just more ruggedized. It has big wheels, off road tires, a huge bash plate up front and a black grille. It uses the Crew Cab version of the truck and will likely be hugely customizable. The version we saw as a concept had spare wheels and a neat load bed unit for tools and off road kit. Presumably there will be the same kinds of options as with the standard trucks.

The other news is that Hellcat V8. The Ram TRX is said to feature the 6.2-litre V8 engine which will deliver at least 575 hp. This figure has yet to be finalized but you can bet it will put down more power than the Raptor.

FCA acknowledged that the Raptor has a huge lead in terms of having created the niche and in driving truck sales and Ram wants a piece of that. Yet they also said that despite the US being the prime market for trucks, the Ram TRX would be a global model rather than just a North American one. It will definitely appear here and in the US, but FCA’s primary focus is to bring Ram to the world, not just to our shores.

I’m going to keep an eye on developments of the Ram TRX. For now, the Ram 1500 is still one of the best trucks you can buy. Check them out at Unique Chrysler Dodge Jeep Ram, 915 Walkers Line, Burlington, ON  L7N 3V8.