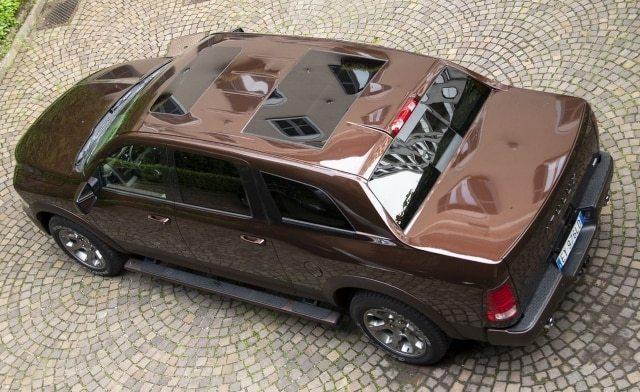 While I love the current Ram 1500, I’m not sure I could pay a quarter million dollars for one. That’s what Italian coachbuilder Aznom wants for this special one off truck SUV hybrid.

The company took a Ram 1500 Crew Cab and added an entire passenger compartment at the rear. It is now a curious SUV/pickup combination that has been likened to a Mercedes-Maybach concept that appeared earlier this year in China. All that aside, the Atulux sure is a curious beast.

Atulux
With a Ram 1500 Crew Cab as its base, the Atulux was off to a good start even though the Ram isn’t available in Europe. Apparently, Atulux stands for All Terrain Utility Luxury and is certainly an accurate name.

The design looks just like a Ram 1500 for the front half of the vehicle. The cabin extension at the rear extends interior space for half of what was the truck load bed. The rest has had a lid fitted to become a trunk. From some angles it looks like a less rugged Humvee while in others it still looks very much like a Ram.

The changes on the outside have been significant but it’s on the inside where it really counts. As Aznom are world renowned coachbuilders, it is exactly where you would expect it to shine.

The interior is sumptuous to say the least. A combination of soft leather, Nubuck and Alacantra make up the material side of things. Everything has been reupholstered in top quality material and finished off with wood trim. The centre console has been turned into drinks cabinet with a decanter for whiskey.

The driver’s seat looks the same as the original truck just with far superior materials and finishing. The position and controls are the same, the centre stack is largely the same and the passenger seat is the same. Just done to a much higher standard than stock.

In back, the centre console is a luxury champagne cooler and a coffee maker while a compartment hides an Xbox that drives two 17 inch screens that fold down to entertain rear passengers.

Under the hood of the Ram 1500 Atulux is the stock 5.7-litre Hemi V8 engine that drives the extra weight with ease. The drivetrain and suspension have also been left stock but the suspension has been changed for uprated air suspension and the brakes have been uprated too.

The starting price for one of these is $263,000 (US) and depends entirely on how you specify it. As these are custom built, presumably you can have whatever you like inside as long as you can pay for it!

While the Atulux may be an acquired taste, the donor vehicle is solid. Visit Unique Chrysler Dodge Jeep Ram, 915 Walkers Line, Burlington, ON  L7N 3V8 to get your hands on a Ram 1500.