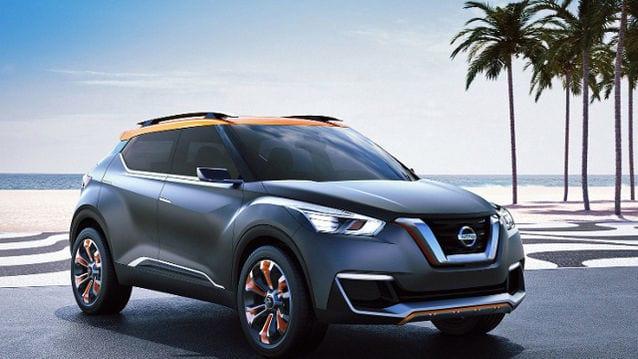 Nissan have finally confirmed they will be entering the crossover market. The model, called the Nissan Kicks, is an evolution of a couple of concepts seen before at various auto shows around the world. Production should begin soon.

The profile of the Kicks has more than a little Juke in it while also being different enough to stand apart. It began life as the Nissan Extrem concept that was shown at the 2012 at the Sao Paulo Auto Show as the Kicks concept. It then reappeared at the same show two years later before its final showing at the 2015 Buenos Aires Motor Show.

Now it seems Nissan are ready to bring it to production.

Nissan Kicks
The Nissan Kicks will initially be destined for South America, which is why it was predominantly shown there. However it will spread its wings much further as it is destined eventually for the global market. From what we have seen so far, there would definitely be a receptive audience for it here in Canada!

The design is very modern with lots of panel detailing. The front end has the signature Nissan grille and badge along with a set of very cool shaped headlights. The lower grille also has an interesting shape. A rising beltline, sloping rood and high ground clearance all hint at crossover. Although it could also indicate some challenges to rear passengers.

The back end has certainly been pared down since the original Extrem concept and we’re grateful for that. It has another set of nicely shaped lights, more panel detailing, a rooftip spoiler and twin tailpipes. It’s a positive end to a funky design.

Nissan produced a video of the Kicks in time for the 2015 Buenos Aires Motor Show.

We like the look of the Nissan Kicks. While we don’t know anything about the drivetrain or underpinnings yet, the design itself looks cool. It’s a masculine crossover that will still appeal to wide markets and as long as the cabin isn’t compromised by that low roof, will offer flexibility to suit a huge range of lifestyles.

We’ll keep an ear to the ground and try to learn as much about the Nissan Kicks as we can. We’ll let you know what we find out. In the meantime, visit Collins Nissan, 155 Scott Street, St. Catharines, Ontario, L2N 1H3 for some great deals on new and used Nissan vehicles!