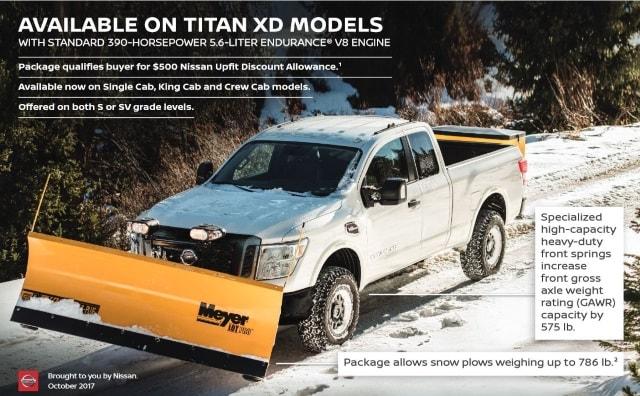 Nissan have released one of the most useful addons to a truck possible. A full snow plow preparation package. While not alone in offering such an addition to a truck, this Nissan version for the Titan XD has been very well executed.

The Nissan Titan XD Snow Plow prep Package includes reinforced front suspension to enable the truck to handle up to 786 pounds worth of plow. The higher capacity springs brings the front axle grow weight rating up to 4,900 pounds to help cope with the extra weight.

The Nissan Titan XD Snow Plow prep Package is available across the gas-powered range, in Single Cab, King Cab and Crew Cab for both S and SV trims. The package does not include the plow or any of the ancillary equipment but will allow fitment of plows from manufacturers such as Boss, Fisher, Meyer, SnowEx and Western.

With the 5.6-litre V8 engine in the XD and its 390 hp and 394 lb-ft of torque, the trick is perfectly capable of handling even the worst Canadian winter. While winter has yet to arrive, nothing beats being prepared for every eventuality.

The 2017 Nissan Titan XD is a handsome truck that has taken on the three main incumbents at their own game. Still in the minority as far as sales go, it still manages to hold its own and offer a little originality to an all too familiar range of common designs.

With a solid chassis, good suspension and three cab types, the 2017 Nissan Titan XD has everything necessary to get the job done. The standard 5.6-litre V8 engine delivers 390 hp and 394 lb-ft of torque. It uses a seven speed automatic transmission to send power to the rear wheels. There is also a Cummins diesel option too in a 5.0-litre 310 hp 555 lb-ft of torque unit.

The addition of the Nissan Titan XD Snow Plow prep Package brings a standard XD up to the Heavy-Duty Front GAWR option already available for the truck. It is an essential component for anyone wanting to plow the tons of snow we get every year and alongside one of these very capable engines should help keep our driveways and roads clear this winter.