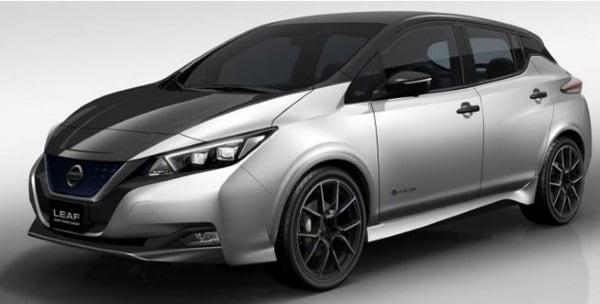 Nissan have hinted at a new concept they plan to unveil at one of their home auto shows, the 2018 Tokyo Auto Salon. If that wasn’t enough, Nissan also plans to show another 14 cars at the show. They include some new models, concepts and a couple of special editions.

The 2018 Tokyo Auto Salon starts on 12 January and is usually where Japanese automakers show the majority of their new concepts and special editions for the year. It seems Nissan is getting off to a strong start.

Nissan Leaf Grand Touring Concept
The 2018 Nissan Leaf looks amazing and is a welcome successor to one of the world’s favourite electric cars. With much better looks, a greater range and much more appealing package, it is likely that the new Leaf will sell exceptionally well. As well as the standard hatch, there may well be a Grand Touring version.

Nissan is planning to unveil a Nissan Leaf Grand Touring Concept as well as other new models at the show. From the teaser image released by Nissan, we can see what looks like a slightly longer vehicle with body kit and extra styling from Autech, Nissan’s in-house customizer.

We don’t see much else from the image and the company has so far been tight-lipped about what else we can expect from the new car. We don‘t know if the vehicle will have the same engine, battery pack, range or anything new. I think it reasonable to expect a few custom tweaks under that attractive body shell otherwise there are going to be a few disappointed people at the show!

According to the show listing, Nissan will be showing 15 vehicles that include:

As well as being a new year, January is also the beginning of the auto show season. It’s a great time of year to be an auto journalist with the main challenge being choosing what to write about. With a real emphasis on EVs and autonomy projected for 2018, I think we will be hearing a lot more about Nissan this year!

I would like to take this opportunity to wish all you loyal readers a very happy new year!