Taking a Look at the Nissan GripZ Concept

Taking a Look at the Nissan GripZ Concept 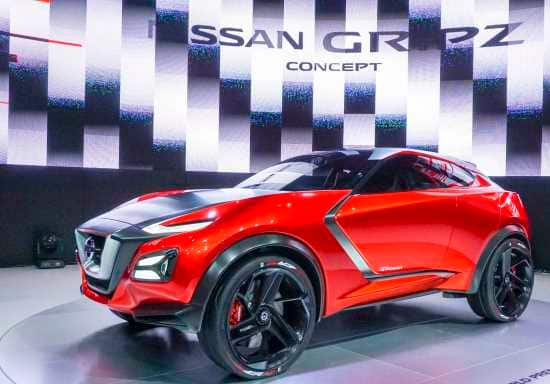 The 2015 Frankfurt Motor Show brought us a lot of concepts from some major automakers. Some were good, some not so much. All showed us the design intent and potential future direction each automaker is considering for the next few years. Aside from the 2016 Kia Sportage, it was the Nissan GripZ Concept that caught our eye.

As you may tell from the spelling, the GripZ is a potential vision of a future Z car. You can tell little of that from the design itself as it's quite squat, tall and bears little resemblance to either a current or past Z car. It's almost a crossover in profile.

Nissan said they envision a future Z car that combines sports and utility in a crossover-like guise. We know they want to expand the
line of Z cars, so this could certainly be one direction they might move.

Displayed in a lovely burnt orange colour, the Nissan GripZ Concept sat on large 22" black alloy wheels and had black trim all round. The showstopper was the doors. The front opens forward and up just like a McLaren while the rears are suicide-type doors that open out and back like a Rolls Royce.

There is a slight air of the 240Z about this design. Even if Nissan hadn't said they used it as an inspiration, the long sloped hood and squat rear end do hint at that 1970s classic. Nissan also said the car was inspired by sports bicycles, whatever they are.

On the inside, a pared back interior echoes the design of the exterior. Simple one-piece seating, a simple dashboard with no bulky binnacles or centre stack, a three spoke steering wheel, girder-like pillars and three colour scheme work well. Inside, a bicycle influence is more obvious. The centre arm rest looks like a bike saddle and the steering wheel looks a bit like a carbon fibre bike wheel.

As far as we know, it will use a hybrid powertrain. Nissan mentioned "Pure Drive e-Power", which apparently uses a powertrain from an electric car including pieces from the Nissan Leaf. So a gasoline engine of unknown size combined with an electric motor from the Leaf and some kind of CVT transmission is likely here.

Other highlights of the Nissan GripZ Concept are cameras in the headlights, exposed metalwork on the interior, carbon fibre hood and a cool targa-type roof/sunroof arrangement.

Whether we will see anything like the Nissan GripZ Concept on the road in the future remains to be seen. Nissan are definitely looking to expand their lineup and are actively looking at a sports crossover type model. Whether it will be this one or anything like it, we will have to wait and see.