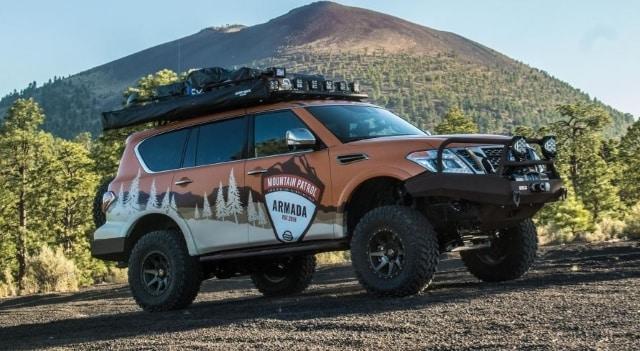 The Nissan Armada Mountain Patrol concept is doing the rounds right now and I like it. It is rugged, can go literally anywhere and takes a solid foundation and builds on it in an awesome way. It was also entirely inspired by Nissan’s social media followers.

The Japanese automaker wanted something to show at the Overland Expo West in Flagstaff, Arizona. They reached out to its followers to ask how they would customize a Nissan Armada for overlanding. The result is above and I think it looks good. It is a huge vehicle with high ground clearance, neat Mountain Patrol paint job and roof rack. It looks the part and genuinely looks like it could tackle anything.

The parts list is impressive. The most obvious are the 35-inch Nitto Trail Grappler tires that sit on 17-inch Icon Rebound wheels. To make room for them, the Armada sits on a Calmini six-inch lift with Icon Vehicle Dynamics coilover suspension. This takes the already decent ground clearance and turns it up to 11.

If that wasn’t enough, you also have a ton of lights, a Warn Zeon Platinum winch with Factor 55 closed-loop shackle mounts, Rhino Rack shovel, MaxTrax and a Hi-Lift jack. Fully loaded isn’t the half of it!

2018 Nissan Armada
At the heart of this concept is the ever popular 2018 Nissan Armada. A full size SUV with genuine go anywhere capability. It is large and feels it but once you’re driving, the size isn’t such an issue.

The body on frame SUV has been with us for a while and has been steadily updated since launch. The design is typical of Nissan, solid, reassuring and as understated as a vehicle of this size can be. It doesn’t shout or say ‘look at me’ it is more content to get you where you need to go whether that is to school or across the mountains.

The 5.6-litre V8 engine produces 390 hp and 394 lb-ft of torque. A smooth automatic transmission sends power to the rear or all wheels. It can tow up to 8,500 pounds and carry even the largest family in comfort across its three rows of seating.

The 2018 Nissan Armada has genuine off road ability and would be as at home in the wilderness as it would be going to the store.