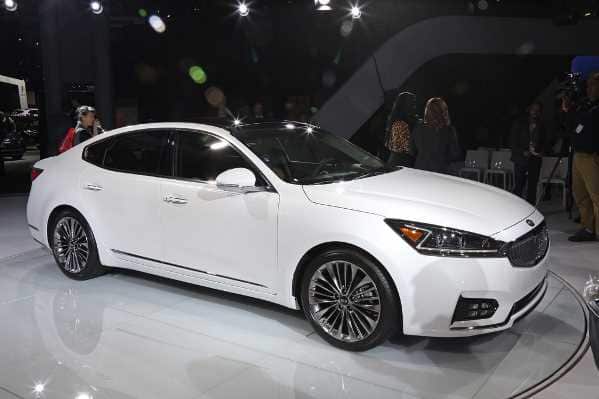 Last week’s New York Auto Show had a lot going on. It is one of the year’s better shows, with all the big brands making sure they get at least some of the spotlight. This week we will be highlighting what we saw there on the Car Nation Canada blog, starting with the 2017 Kia Cadenza.

The 2017 Kia Cadenza is now in its second generation and looking better than ever. Peter Schreyer himself apparently helped design this car, which is perhaps why it looks so good.

The first thing you notice is the new grille. While still tiger nose, it has a new look reminiscent of chrome teeth. Bordered by those angled headlights and sitting atop a new lower grill and fog light surround, it offers quite the new look for the 2017 Kia Cadenza. A single flowing line can be traced from the very front to the very rear, offering quite a pleasing profile.

At the rear, the new lights reflect the new grille and also display the new ‘Z’ theme that the Cadenza is adopting. There are also new 18 and 19 inch alloy wheels and two grille types depending on the trim level you buy.

Looking deeper into the 2017 Kia Cadenza
Inside, the cabin receives some upgrades including new fabric, leather and soft touch materials throughout. New technology has also been added in the form of forward-collision warning, autonomous braking, lane-departure warning and blind-spot detection. There is also talk of a heads-up display although we didn’t see one. Kia UVO will also be an option with Apple CarPlay and Android Auto.

Under the skin, Kia said the new chassis is lighter thanks to a higher percentage of aluminium used in its construction. It is also slightly wider and lower too. The front and rear sub frame gets new bushings and the new Kia Amplitude Selective Damping shocks will also feature. Kia says these new shocks offer a much better ride over broken surfaces and more stability at speed.

The 2017 Kia Cadenza will have a 3.3-litre V6 engine that produces somewhere in the region of 290 hp. It will be mated to Kia’s new eight speed automatic transmission to send power to the front wheels.

The intent with the 2017 Kia Cadenza is to go a little upmarket without alienating core buyers. While an auto show is a very idealistic venue where dreams are sold, it is easy to see past all the shine to the reality of the car. As long as it is priced right and performs as well as it promises, we think the Cadenza could be the Korean automaker’s next best seller.

The 2017 Kia Cadenza will go on sale later this year.

In the meantime, Grimsby Kia has a huge range of new and used Kia cars to whet your appetite. Visit us at Grimsby Kia, 435 South Service Road Grimsby, ON L3M 4E8 today!