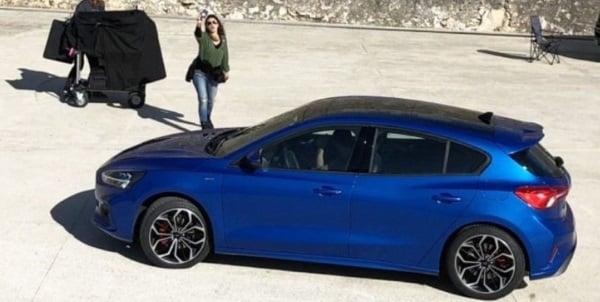 The 2019 Ford Focus is almost upon us and to whet our appetite, Ford have released a teaser video giving us a bit more of an idea what to expect. With release imminent, it is prime time for an automaker to build anticipation for a new model version.

The video doesn’t give a lot away but as the official release is tomorrow, that’s okay. That release is for Europe only, North America has to wait a while. Rumours have it we are going to have to wait up to a year but nothing has been confirmed yet.

Here is the video:

As you can see, the video is very stylish in its monochrome looks and arty angles but doesn’t tell us a great deal about the new Focus. We have seen other teaser images and other hints so it isn’t exactly going to be a mystery but it seems Ford have been playing more coy than usual with the 2019 Ford Focus.

2019 Ford Focus
From what we know, the design with pull the Focus more firmly into line with other Ford global models. The front end is more angular, the grille looks like the one in the Fiesta and new Taurus, the hood contains some interesting angles and the rear looks quite angular too. Finally, the headlights have been tweaked and now include an LED light bar in the centre.

We have seen a camouflaged version and a perhaps-real version in fan photographs but we still don’t know much about what exactly the new Focus will look like. We presume it will remain a similar size and be available as a hatch or sedan like now. Often the Focus is a larger Fiesta and we are okay with that as the design of both have followed each other closely for almost 20 years.

We also expect a series of frugal engines, from turbocharged three cylinders to perhaps a hybrid. Expect a manual and automatic transmission option for all models that will drive the front wheels. Ford usually offers a range of trims too, including sporty ST and lunatic RS models. Standard trims usually come with a bunch of features that run into a pages-long list.

A hybrid 2019 Ford Focus is a possibility. Especially as we have heard that the new Focus RS will have some kind of mild hybrid system bolted onto its 2.3-litre turbocharged engine. We have no details of exactly what to expect yet though.

We will know what the Europeans are getting tomorrow but we are going to have to wait a while to find out what Canada can expect from the 2019 Ford Focus. In the meantime, Northway Ford Lincoln are offering some very generous deals on the current model Focus if you’re in the market for a small family car.