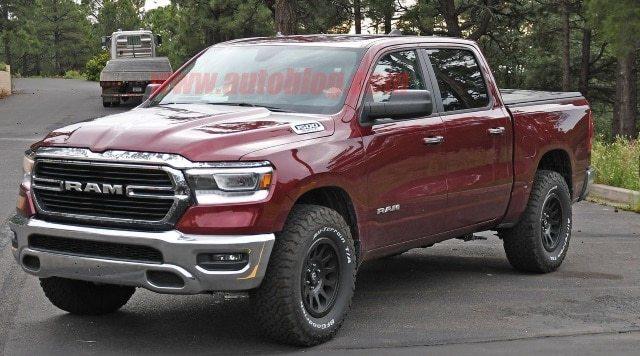 The future Hellcat-powered Ram 1500 TRX has been spotted in action in northern Arizona and was seen in Flagstaff without camo. The Ram truck, presumably a very early version of what had been faked up as a Big Horn, was spied and photographed in all its glory.

The truck has been long awaited and will form part of a much wider campaign of Hellcat vehicles. If FCA carry on, we will have a Hellcat version of every model they sell. While some will make more of an impact than others, the Ram 1500 version is going to go down a storm. It is already being viewed as a Raptor competitor and we can’t wait until it arrives.

The truck in the shot above and other shots as featured on AutoBlog, look a lot like the Ram 1500 Big Horn. The guy who took the pictures said it was definitely a V8 with a whining supercharger under the hood. Presumably, this mule truck is testing drivetrain, chassis and setup of what will eventually become the new TRX.

Aside from the wheels and frame braces the photographer managed to capture, there are no indications of the design or build of the future Ram 1500 TRX. We have no data, no unconfirmed leaks or anything much to go on. All we know is that a Hellcat powered Ram 1500 is on its way and will be a direct challenger to the mighty Raptor.

If the TRX utilizes all 707 hp potential of the Hellcat engine, it will deliver 257 hp more than the Raptor. The mighty 6.2-litre V8 will likely use an eight speed automatic transmission to deliver power to all four wheels and use uprated brakes and suspension to keep everything on the road, or off the road depending on where you take it.

Aside from the engine type, we don’t know anything else about this truck as yet. The original concept was mooted at 575 hp but as the Hellcat is around and has proven its worth, we can expect a minimum of the 707 hp I think.

As interesting as the Ram 1500 TRX will be, one has to wonder whether Ford will take up the challenge and produce a V8 or upgrade the existing model so as not to give too much power away to the Ram. Ford have previously written off the idea of a V8 but if this monster truck is on the horizon, there’s no telling what Ford will to do retain the truck crown.