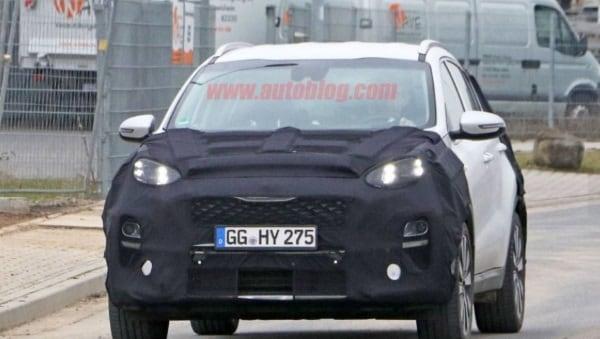 The Kia Sportage is a mainstay of the Korean automaker’s lineup. This current model is only two years old, which is relatively young. Not long ago, a five year old model would still be going strong but with evolution gathering pace, no automaker can afford to sit still. Kia is keeping pace with the market’s appetite for new things and in a big way.

While nobody is assuming this is a completely new vehicle, this will be a facelifted model and is likely to be more than just a new set of lights. The spy shot of the Kia Sportage doesn’t tell us much as the camouflage is quite effective.

We can see a new headlight configuration and what looks like a cluster of running lights. The position has shifted from independent units in the bumper to being next to, or part of, the headlights similar to the Kia Stinger. The rear lights look to have been tweaked as well although we cannot see exactly how or how much.

Show me the light
We expected to see some kind of headlight change as it was the only part of the Sportage to let the car down during assessments from the US IIHS. The vehicle as a whole received a five star rating for safety with the headlights receiving a poor rating. That will likely change this time round, hopefully to provide a full house in future assessments.

While not obvious from the spy shots, we expect the bumpers to be uplifted to. It is also not unreasonable to expect to see new alloy wheels, some new colour options and perhaps some other trim changes.

On the inside, the current Sportage is quite accomplished so I’m not sure what improvements will be forthcoming there. The spy shots show very little has changed from the current model but given that technology and infotainment tracks and vehicle upgrade tracks now run separately, that doesn’t tell us much. At the very least we would expect from new technology, perhaps new infotainment and tweaks here and there to maintain parity with rivals.

Engine-wise, we have no idea what changes are on the horizon. The current lineup are performing well but there are always improvements to be made. Rumours of a hybrid model still do the rounds but Kia has said nothing about them recently. The same for the transmission. Efficiencies are always possible but with the current unit proving reliable and user friendly, there may be nothing to see there either.