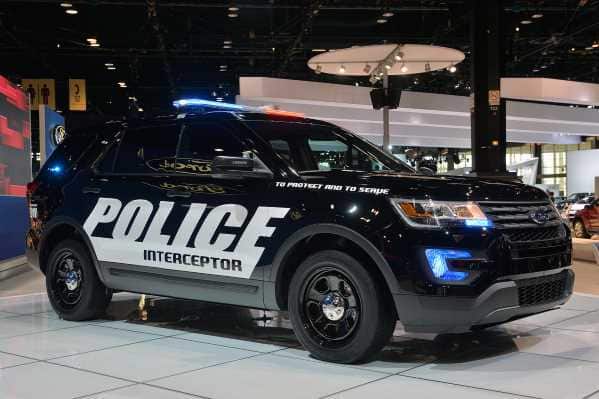 One of the
most interesting exhibits at the Chicago Auto Show is the Ford Police Interceptor
Utility SUV. Even though the show has a few days left to run, for us, this SUV
almost stole the event. As fans of the 2016 Ford Explorer, we couldn't help but
stare at this new police interceptor.

The looks
say it all, but there's a lot more to the Ford Police Interceptor Utility SUV
than just the profile. Based on the new Explorer, this uprated version has been
designed to cope with whatever law enforcement has to deal with on a daily
basis.

The design
of the Ford Police Interceptor Utility SUV is much like the new Explorer but
with a few key differences. Yes it has police signs emblazoned across each side
and flashing lights, but there are also other, less obvious differences. The front
end is slightly different than the civilian model. With more aggressive
headlights, new bumper, low front sill and of course, optional bars, it's
definitely a cop car. The rear end also looks slightly modified with different
light cluster.

As you
would expect, there are plenty of mechanical changes to help the Ford Police
Interceptor Utility SUV cope with daily
life. They include uprated suspension, uprated brakes, 18 inch steel wheels, a high
specification cooling system, reinforced subframe and probably a few other
improvements Ford haven't told us about.

Under the
hood is either a 3.7-litre V6 that's good for 304hp and 279 lb-ft of torque or
the 3.5-litre EcoBoost V6 that delivers 365hp and 350 lb-ft of torque. Both
engines will use a six-speed automatic transmission with four wheel drive.

This is no
ordinary transmission as it includes the legendary Pursuit Mode. This mode will
automatically shorten shifts when it detects more aggressive driving to help
performance. It sounds cool even if the cop driving it doesn't notice the
performance gain!

The Ford
Police Interceptor Utility SUV will also feature the option for Surveillance
Mode. We featured this before when it was first unveiled by Ford. It monitors
the rear of the car and can warn the driver is anyone approaches from behind or
from a blind spot. It can also automatically engage door locks and close all
open windows too. It's a neat tool that would be especially useful for solo
patrols.

The Ford
Police Interceptor Utility SUV is apparently being made available next year, so
you can expect to see it in your rear view mirror shortly after.