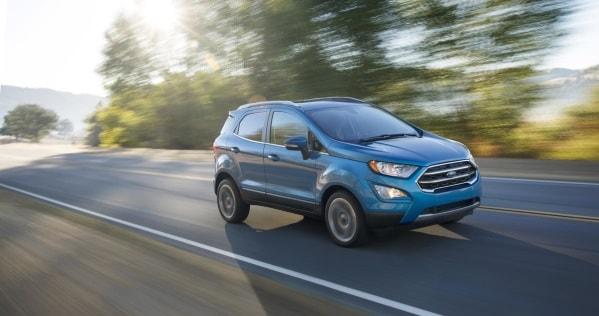 More news from the LA auto show last week was that the Ford EcoSport will be making its way to the U.S. and Canada at some point. The model has been in production for over 13 years in other territories and has done exceptionally well in Europe and Asia. Sold as the Kuga in the U.K. it is apparently Ford’s best-selling SUV outside North America.

So it’s no wonder that we will be seeing the new Ford EcoSport soon.

What is the Ford EcoSport?
The Ford EcoSport is a front wheel drive compact SUV with quite an upright appearance. It follows Ford’s global design philosophy and takes influences from across the range. Look closely enough and you see Escape, Fusion, Focus and other models mixed up within its DNA.

It looks long and narrow, which is a departure from the shorter and squatter designs of our usual SUV. There is a lot of streamlining too with angled lighting, angled hood, very raked windshield and curved roof. As gas mileage is much more of a concern in countries were fuel is more expensive, Ford has introduced these measure to allow the EcoSport to slip through the air a little easier.

Here is a video featuring the new model.

Engines and mechanicals
We can expect a turbocharged EcoBoost 1.0-litre engine and a 2.0-litre four cylinder. Exact capacities and outputs are unknown at this time. It is likely that Ford will use its existing three cylinder EcoBoost engine which is proving its worth in other cars. How it will be tweaked and tuned for this model we just don’t know yet.

The will be an automatic transmission with front wheel drive or an ‘intelligent four wheel drive system’. More than that we just don’t know.

We can also expect the same trim levels of other Ford vehicles, from based up to Titanium. Again, we don’t know much about what will be included and likely won’t until closer to launch. Ford were also tight-lipped about when the launch will be. I’ll keep an eye on the company and let you know as soon as I learn more.

In the meantime, visit Northway Ford Lincoln, 388 King George Road Brantford ON N3S 3N2 for all your new and used Ford needs.