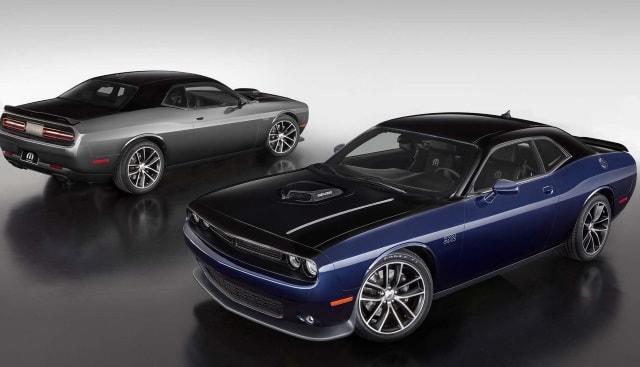 Last week was the 80th birthday of Dodge tuner Mopar. They celebrated in true style by releasing a series of Mopar '17 Dodge Challenger special models. These are very limited editions, 160 in all and look pretty good if the teaser image is anything to go by.

The Mopar '17 Dodge Challenger is built on the foundations of the 392 Shaker and utilizes the same engine and delivers the same power. That’s where similarities end though.

The first thing you notice is the two-tone paint. One is Pitch Black and Contusion Blue and the other is Pitch Black and Billet Silver. While I’m not sure about ‘contusion blue’ as a name, the colour tone is pretty good. Both colours are prepared in the Mopar body shop and feature a black hood, roof and trunk. Hand painted Mopar logos also decorate the outside.

Mopar magic
Other features include a Shaker hood scoop, trunk spoiler, black exhaust tips and other trick bits. Under the skin is even more Mopar goodness including a Hellcat style air feed in the front headlight, special strut bracing, suspension caps and uprated Brembo brakes.

The Mopar '17 Dodge Challenger will feature a 6.4-litre V8 engine that delivers 485 hp and 475 lb-ft of torque. It will make good use of all that cold air to deliver all that power to the rear wheels using a six speed manual transmission.

The cabin gets so Mopar love too. The Mopar '17 Dodge Challenger will feature special performance seats with Mopar logs, Tungsten stitching and flush inserts. The same theme carries on through the interior.

As an added bonus, owners will also get a birth certificate for the car, a hand signed picture of the Mopar '17 Dodge Challenger and some other memorabilia.

The Mopar '17 Dodge Challenger will be available this summer, a couple of months after the Shaker. There is a time and price premium for all that work, which is why deliveries are expected late summer 2017.

If you can’t wait that long, Parkway Chrysler Dodge Jeep Ram Mississauga, 2260 Battleford Road, Mississauga, has the full range of Challenger models both old and certified used. You will have to go a long way to beat our prices and service so head on over and grab yourself a deal!