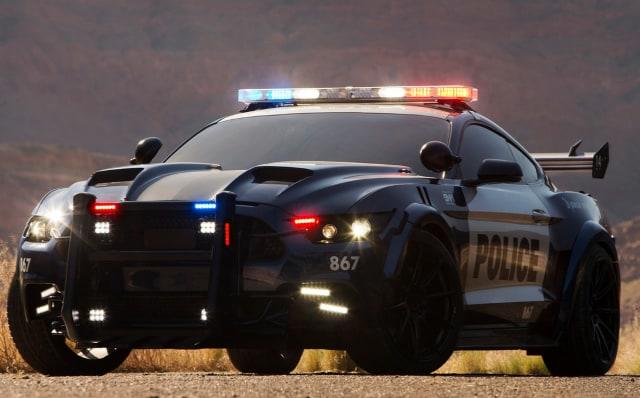 Promoting a new Transformers movie, Michael Bay shared an image of the new Barricade car character made from a Ford Mustang. Hosted on his Flickr page, the image shows us what the Decepticon character will look like in his new movie. Even better, it goes head to head with Bumblebee, a Chevrolet Camaro, which is something we all like to see!

Transformers movies are more about big guns and explosions than driving action, although there is usually a bit of that in each. However, as a poster piece, the new Barricade Mustang really looks the business. Given how good all of the vehicles look, it’s the kind of blatant product placement we don’t mind. The movie is out later this year and here’s hoping the Mustang and Camaro get some on-track head to head action!

2016 Ford Mustang
After last year’s redesign, the Ford Mustang is gaining a huge following. It isn’t just the new looks, it’s the new engines, new performance packs, Sync 3 and the sheer joy of owning and driving a new Ford Mustang. The pony car really has come of age.

The design is awesome, there is simply no other word for it. It looks like a shark. A big front end that pulls into a rounded fascia, nice grille with mustang logo and a nice lower facia with fog lights and splitter. Each panel has some kind of detail on it to draw the eye and those hood vents look the part.

Inside, the cabin continues the good work from last year with a foot firmly in the heritage camp and another firmly in the modern. It’s a comfortable blend of old and new influences that make this car a joy to behold. The materials are all top quality, the finishing is excellent and the level of technology is just right. The driving position is pretty good too.

Under that pretty hood is one of three engines. There’s a 3.7-litre V6 that generates 300 hp and 280 lb-ft of torque, a 5.0-litre V8 that’s good for 435 hp and 400 lb-ft of torque or an EcoBoost turbocharged 2.3-litre that delivers 310 hp 320 lb-ft of torque. All use either a six speed automatic or manual transmission to send power to the rear wheels.

The 2016 Ford Mustang comes as either a coupe or convertible in five trims, V6, EcoBoost, EcoBoost Premium, GT and GT Premium. All are well equipped and offer a huge range of optional extras.

The 2016 Ford Mustang really is an awesome car. Visit Northway Ford Lincoln, 388 King George Road Brantford ON N3S 3N2 to see just how good it is!