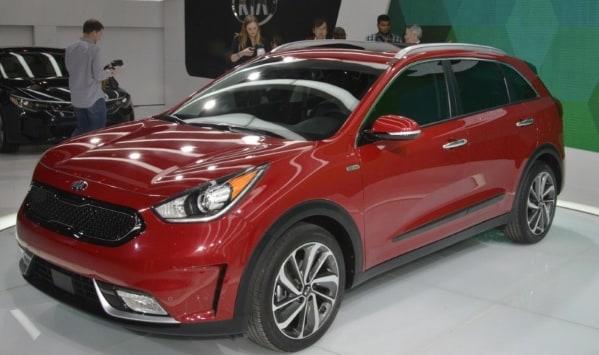 Kia has come a long way from those early boxy models. Since Peter Schreyer took over design, the Korean automaker has completely changed its entire design philosophy, from how a car looks and feels to how it pleases the eye both at rest and in motion. So it’s no wonder that the automaker has been winning awards for these changes. Three of which were awarded last week.

The Kia Optima Sportswagon, Kia Niro and the new Kia Rio were each awarded a Red Dot Design Award. The Red Dot Design Awards are for product design across all industries. The Red Dot Awards are presented in the three categories (Product Design, Communication Design and Design Concept) and are judged on criteria such as degree of innovation, formal quality, functionality and ecological compatibility. In 2017 companies from 54 countries registered more than 5,500 products. (From Red Dot).

The Kia Optima Sportswagon was awarded the ‘Best of the Best’ award for ground breaking design. This is the highest award offered by Red Dot. The Kia Niro was awarded its prize for attention to detail while the Kia Rio was praised for its new design, cabin quality, infotainment options and safety tech.

Kia’s Peter Schreyer had this to say about the awards:
‘The design of the three models that have been honoured with the Red Dot Award was the result of the very close collaboration between our design centers in Korea, Germany and the United States. Our global design team has every right to be proud of this new triple triumph as it underlines Kia’s high design quality, which is unanimously recognized by experts’, says Peter Schreyer, President and Chief Design Officer of Kia Motors Corporation.

‘The fact that we have succeeded in winning the ‘Red Dot: Best of the Best’ for the third time in succession with the Kia Optima is proof of the continuity of these high design standards.’

The Kia Optima won the ‘Best of the Best’ award in 2016 too and back in 2011. Overall, Kia has won 18 Red Dot Design Awards since 2009 when the automaker began to overhaul their vehicle range and seriously update their design, build, engines and drivetrain. A Kia from 2009 is almost unrecognizable from a modern car and shows just how far the company has come in the past eight years.