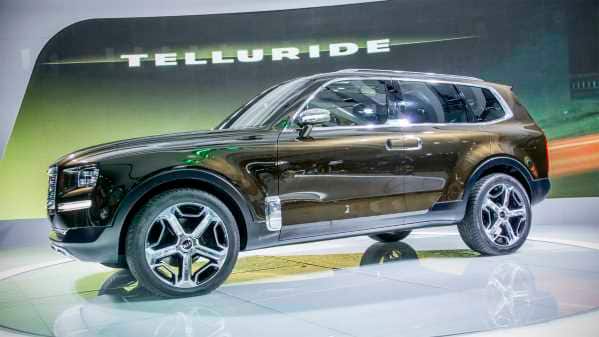 The Kia Telluride concept went down a storm. It was a departure from the usual Kia look and took the fight almost up to the Lincoln Navigator. The looks and styling of the concept was largely welcomed which must have made the Korean designers very happy indeed. So happy that there are strong suspicions that the production model will closely resemble the concept.

While nothing has been confirmed by the automaker that I know of, the rumour mill is chewing over this one loudly. Many notable auto blogs are all saying the same thing. While it may all come from a single source, if you look at the concept dispassionately, it isn’t an unreasonable assumption that the gorgeous Telluride could make it to dealerships in the not-too distant future.

Kia Telluride
While the concept still had the Kia tiger nose, it was quite a departure from the usual faire served up by the Korean automaker. It was rounder, softer and much more luxurious. More Lincoln or Jaguar than typical Kia. Very few of Kia’s concepts had such a warm reception which is perhaps why rumours are saying it will hit production looking very similar.

The only difference that we can see is that the production model may be FWD instead of RWD. Certainly not a showstopper and no issue for most owners but anyone who wants to tow may find it more annoying. For us Canadians, there is likely to be an AWD option too.

Speculation is that it will use a new platform based on a joint Kia and Hyundai design that will be able to use HTRAC, the company’s all-wheel drive setup built for FWD vehicles. It is also rumoured to feature the existing 3.3-litre V6 engine currently in the Sorento. This is logical as that unit is reliable and has enough power to drive a larger vehicle. In its current guise, that V6 produces 290 hp and 252 lb-ft of torque.

Less is ‘known’ about the interior of the Telluride. Sure we would like the LED instrument panel and touchscreen controls of the concept. We would also like the practical layout, all the cubbies and cupholders, the comfortable-looking seating and nice ambience that the concept delivered.

If the Kia Telluride can deliver Jaguar F-Pace looks with typical great value, any Telluride that does make it to the dealership is going to sell fast. You get all the benefits of a premium SUV with very few of the financial costs that come with it. Kia have always maintained great value and there is no reason to think that will change here.

We don’t know anything for sure about the Kia Telluride yet but it’s always fun to speculate. I will be keeping an eye on Kia over the next few months and will let you know if anything concrete comes up. In the meantime, the current range of vehicles at Georgetown Kia have their own compelling value proposition!