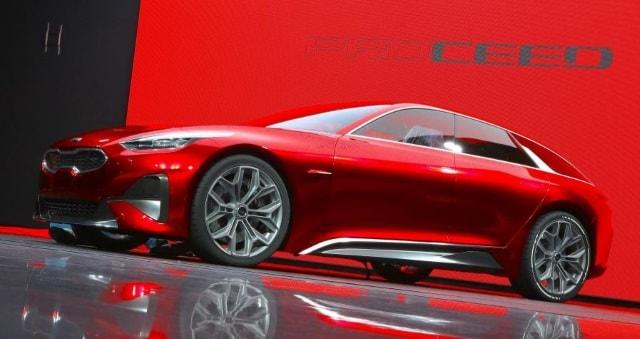 The Frankfurt Auto Show, Internationale Automobil-Ausstellung, last week had many concepts but few will ever make it to production in their current guise. One of the most likely to hit the streets is the Kia Proceed concept.

Kia themselves said while the concept was an idea right now, if the public appetite for the model was sufficient, it could hit production. In a recent interview with CarBuzz, Artur Martins, Kia's European marketing chief said:
‘For the time being it's a design exercise. It's one of three body styles we're evaluating right now for production, so it's possible this will move beyond the concept stage. We need to feel the pulse of the public as to whether this is something they want.’
The design is a shooting brake which is unusual but useful. A shooting brake is described as a vehicle that has ‘seats for eight persons as well as the driver, whilst four guns and a large supply of cartridges, provisions baskets and a good bag can be carried’. This description was coined in 1908 and while times have changed, the attractive profile of such a vehicle has not.
Kia Proceed
The Kia Proceed concept follows in the footsteps of the Stinger and the Sportspace. Both showed that the Korean automaker has a real flair for design that should silence any remaining doubters of this manufacturer’s credentials.
The design is very sleek and would work very well in its current guise. The subtle front end manages to include the Kia tiger nose while also being unfussy and smooth. Flowing lines over the hood and fenders are equally unfussy.
Only mild detailing on the lower sill interrupts that flow from one end to the other.
A huge windshield and curved roof end with a minimalistic rear with a single light bar to complete the look. That single light bar is apparently called ‘Luminline’ and looks great.
Seen in profile, the windows seem to be one contiguous line broken only by that fin-like C-pillar. That is also a very neat design trick that looks good enough and practical enough to make it to production.
As the Kia Proceed is a design concept, there was no mention of engine and drivetrain. To be honest, it doesn’t really matter as the design alone could carry the vehicle if it ever made it to production.
With Kia planning to stop making three door vehicles and the shooting brake being a viable alternative to the crossover, there is a lot of scope for the Kia Proceed if it ever hit market. I for one sure hope it does!
To see the current crop of top class Kia designs, visit Kia of Hamilton, 1885 Upper James St, Hamilton ON, L9B 1K8.