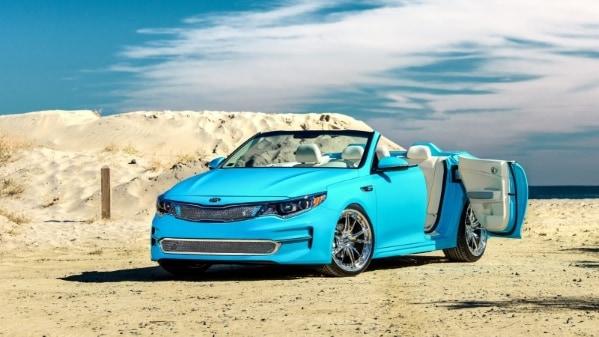 We may have mentioned it once or twice before, but we love
SEMA. It’s the one place manufacturers and tuners can have a little fun with
their cars. They let their imaginations go wild and give us something they
would like to drive themselves rather than what the company accountants would let
them manufacture. That’s exactly what this Kia Optima is all about.

Called the Kia Optima A1A, the concept is one of six cars
Kia is apparently bringing to Las Vegas this year. The other two they announced
was the Kia Forte Koup Mud Bogger and PacWet Adventure Sorento. The idea is
that Kia is creating six regional variations that represent the lifestyles of
six areas of the U.S. The Optima represents Florida.

Four door convertibles are something of a rarity, yet their
practicality is undeniable. So Kia’s convertible Optima really is a sight for
sore eyes. The bright blue colour scheme may be a bit much for some, but
remember this is a concept. I actually really like it and the white leather
interior works exceptionally well with it.

A subtle bodykit and chrome external detailing along with
those big alloy wheels make for a great looking car. Some drop top conversions
can look a little awkward, but this one looks superb. The Kia Optima design
lends itself exceptionally well to having no roof and it is our new “would love
to see in the real world” car.

The 2016 Kia Optima is one of our favourite sedans. It’s
calm, sophisticated, well designed, has a great series of engines and the cabin
is higher quality than ever. There really is nothing here to dislike.

Though it shares the same platform as the Hyundai Sonata, it
is a completely different beast. The design is great, with a very simple but
elegant profile from the very front to the very back. The tiger nose is of
course, present and correct, but so is a sleek body, nice wheels and a very
pleasing whole that would look good on any driveway.

Inside, the cabin is probably the best it has ever been. The
interior materials are top class, the design is good, there is plenty of
technology and enough space to seat the whole family in safety and comfort.

Under the hood is either a 2.0-litre turbo, a 1.6-litre turbo
or a normally aspirated 2.4-litre engine. Each has plenty of power and torque
and is more than enough for any situation.

We are looking forward to SEMA. It’s going to be a good one
again this year. With many of our favourite automakers in attendance, including our very own Kia, there
really is going to be something for everyone!