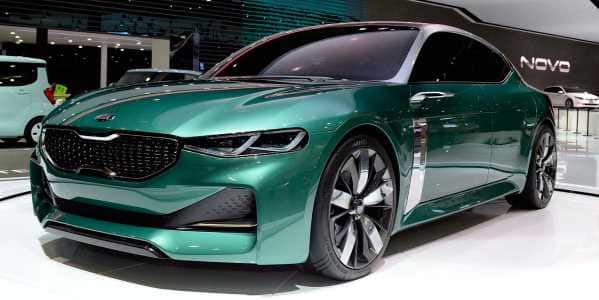 As well as
the big news coming out of the 2015 New York Auto Show, the Seoul Motor Show is
also on right now and generating its own headlines. The one we are most
interested in so far is the Kia Novo Concept.

Rather than
being an actual concept car, this is a showpiece of the direction Kia designers
are heading. So rather than seeing a Novo in dealerships anytime soon, you may
see the design cues on other existing vehicles. It's a good way of showcasing
ideas without the risk of tainting an existing model.

The Kia
Novo Concept is a fastback sedan built around the global C platform. Kia seemed
to have looked at BMW for their wheel positioning as each wheel is set firmly
in each corner. The overhangs are short and aggressive, while the balance of
the car look very sporty.

The Novo
Concept definitely has an air of the 1-series sedan about it and not just in
wheel position. The long sloped hood is very reminiscent of the 130 sedan, but
the tiger nose differentiates it nicely. Angled headlights, a big air dam and
lower grille and an aggressive brake vent at each corner with body kit surround
is a good look.

The lack of
B-pillar is an interesting element too. It's similar to a convertible, but in a
hard top. It would have to be a hard top indeed to meet regulations for
strength but it looks great. The use of cameras instead of side mirrors also
add to the aero look.

The concept
uses a 1.6-litre turbocharged engine and a seven speed dual clutch
transmission. Power is delivered to the front wheels. This is a similar setup
to the 2016 Kia Optima we saw at New York.

The tires
are slightly different to the norm. The material we have seen on the Novo hint
at a double contact point with a concave centre. Kia call it an "adaptive
concave" profile, which means the centre acts as a water channel to
maintain grip in very wet weather. How effective it is remains to be seen but
the theory is sound.

The Kia
Novo Concept is the latest in a long line of daring concepts that shows how the
Korean automaker is maturing. Their cars are getting better and better and it
really looks as though the manufacturer is maturing as a worldwide auto
designer.

While we
don't expect a new Kia model to come out of this concept, any future car that has
any of these elements is going to be very popular with buyers across the world!