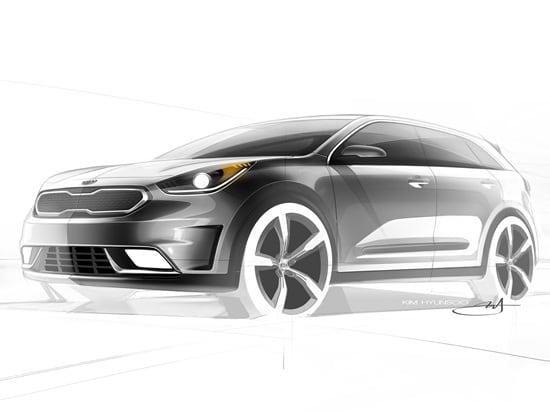 The Kia Niro concept hit the auto shows during 2013. We
first saw it during coverage of the Frankfurt Motor Show and then everything
went quiet. Now Kia have announced
it will be produced during 2016.

The Kia Niro Hybrid forms part of the “green car roadmap”
they announced on 16th November. It will be one of up to eleven
green cars, increasing the count from the current four. It inevitably also
brings a new nomenclature, HUV, for Hybrid Utility Vehicle.

Developed in secrecy and completely separate from the rest
of Kia’s cars, the Kia Niro Hybrid will be something entirely different. It
will include lighter, higher strength steel and a modern hybrid powertrain to
make it both light and fuel efficient.

Kia said they kept development of this car separate from
other models to ensure it began with a clean slate. While it has the
underpinnings of a compact SUV and the signature tiger grille, the styling is
unlike any other Kia model of the moment. It’s simple and sleek and signifies a
real step forward in terms of design for the Korean automaker.

That new steel chassis is said to be strong as well as lightweight
and is expected to score well in safety tests. It is also thought to have side
benefits such as less producing less noise and vibration when on the move.

The engine will be the 1.6-litre GDI (gasoline direct
injection) four cylinder paired with a 32 kW electric motor. The engine,
codenamed “kappa” is capable of 103 hp and 108 lb-ft of torque while the
electric motor uses 1.56 kWh lithium-polymer batteries. Both will utilise a
six-speed double clutch automatic transmission. A plug-in electric variant will
hit production later on.

The Kia Niro Hybrid marks the start of a campaign to deliver
many more fuel efficient and low emission cars to the market. Kia wants to
lower the weight of cars by 5% by 2020 and deliver a 25% improvement in gas
mileage at the same time. They are also planning to introduce a range of
efficient powertrains across their range, including fuel cell options.

While the Kia Niro Hybrid has definitely been toned down
from that original concept we saw two years ago, it is still a very interesting
model. We are eager to get our hands on one to see how viable these new
technologies are in the real world. With production scheduled for late 2016, we
have a while to wait yet!

Check out the current range of Kia cars at Georgetown Kia, 199 and 314
Guelph Street, Georgetown, Ontario.