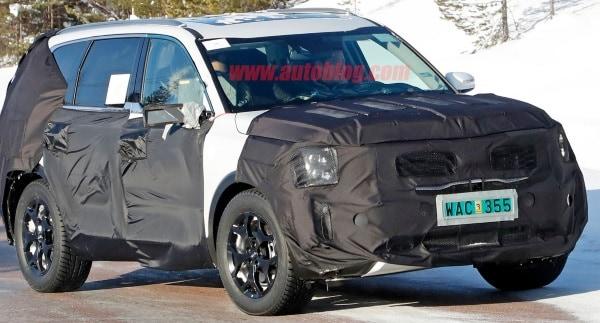 According to images doing the rounds, Hyundai and Kia are testing a new large SUV. It looks like a full size vehicle and it could be the new Kia model, the Telluride. We don’t know for sure of course as these are spy shots but it could just be.

A series of images featured on Autoblog, are of a heavily camouflaged vehicle being tested in the cold. While definitive identification is not possible, we can see a lot through the camouflage and from the various shapes. We are speculating of course, but that is always fun to do.

Kia Telluride
Kia showed us a concept Telluride a couple of years ago and I liked what I saw. The shape underneath this camouflage has similar dimensions and a similar boxy design. Polar opposite to the sleek designs of Kia sedans and cars like the Stinger but perfectly in keeping with other full size SUVs around right now.

The shape is solid looking and upright and looks quite sizeable. There is decent ground clearance and a set of nice alloy wheels. While those alloys may not be for this car, they look good anyway.

Other standouts include the very boxy lights at the front, simple panel design where we see it under the camo and low overhangs at the front and at the rear. A flat roof indicates decent headroom inside while a squared-off rear should allow lots of cargo space in back. A set of vertical lights were about all we can make out from the rear images.

What will power the Kia Telluride is anybody’s guess right now. The concept had a combination of V6 gasoline engine and an electric motor for a combined output of 400 hp. This may or may not make it to production. Kia haven’t said much about future hybrid powertrains for a while so we just don’t know.

It is not unreasonable to expect a launch version to come with a standalone V6 engine from Kia’s existing stable followed by a diesel later. A hybrid is definitely possible and with both Hyundai and Kia both moving towards lower emission motoring, it certainly is not beyond the realms of possibility.

Kia has said that they will be announcing a full size SUV ‘soon’ so we shall keep our ear to the ground for that. Although, with the auto show season already in full swing, we don’t expect anything just yet.

Kia crossovers are taking over our roads. The combination of style, substance and technology, along with a very reasonable price is gaining fans across the world. Visit Grimsby Kia, 435 South Service Road Grimsby, ON L3M 4E8 to see just how much you can get for your money with a Kia.