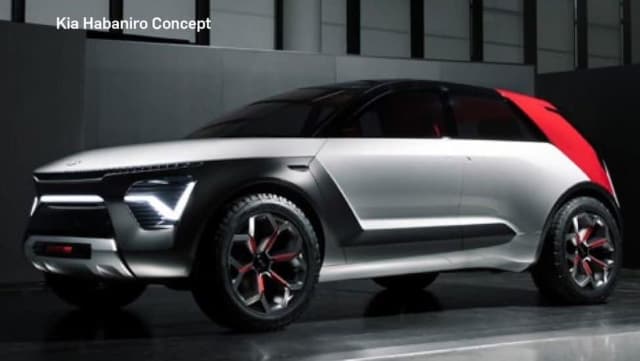 The Kia Habaniro concept was supposed to be a big reveal for the Korean automaker at the 2019 New York International Auto Show. Unfortunately a leak from a newsletter seems to have let the cat out of the bag and leaked images of the new Kia concept earlier than planned.

It isn’t unusual for the manufacturer to do this themselves but Kia seemed to say it wasn’t them. The image isn’t the best quality, having been included in a newsletter and shared around. While the image isn’t going to excite anyone, the concept itself sure will!
Habaniro
Given the name, Kia Habaniro, lots of mentions of its similarity to habanero have been made, usually with ‘hot as hell’ somewhere close. It’s an unfortunate name that was most likely cooked up in Korea and then given a quick look to make sure it didn’t translate into anything rude or offensive before being given the green light.
As long as the car itself is given the green light we can forgive a clumsy name.
The concept looks very futuristic but also slick. The lines are very straight, with a  strong horizontal running down the middle from the tip of the hood through to the red stripe at the back. Blacked out windows and a very subtle roofline don’t give much away while a high ground clearance may hint at a crossover DNA.
The lack of mirrors may be a clue to camera tech or may just have been left out for artistic impression. The same for those chunky tires. They could be part of an off road ability or just used to contrast the smoothness of the design.
As the name is also similar to Niro, as in Kia Niro, it is also possible that this could be a sibling or successor. Another crossover to bolster the lineup in electric or hybrid guise. There does look to be a front grille, so some form of gas engine may appear but given the direction Kia is going, a PHEV is most likely.
As the 2019 New York International Auto Show starts tomorrow, we don’t have long to wait until we find out for sure. I am also sure that the Kia Habaniro concept is going to be one of many concepts we see and fall in love with while we’re here!

If you're in the market for a more down to earth Kia, visit Georgetown Kia, 199 and 314 Guelph Street, Georgetown, Ontario