Kia GT to become a reality

Kia GT to become a reality 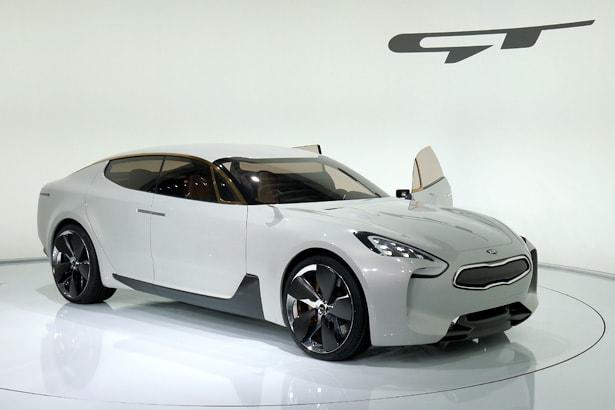 Do you remember us showing you the Kia GT concept a few
years ago? It first displayed at the Frankfurt Motor Show in 2011 and we loved
what we saw. It was a smooth white car with flowing lines and a lot of Maserati
about it. Well it seems that the concept is about to become a reality.

When we first saw the Kia GT Concept, we loved it. It was an
early indicator of where Kia wanted
to go in terms of design and quality. The tiger nose was there, as was the
European inspired design care of Peter Schreyer. The concept was carefully
sculpted in every direction and literally drew the eye across the profile. It
was one of the best concepts we have ever seen.

Fast forward four years to the present day Frankfurt Motor
Show. As well as the 2016 Kia Sportage, Kia also confirmed that the Kia GT is
in active development. Top Gear caught up with Kia's European design head
Gregory Guillaume who confirmed it.

“It’s a completely new vehicle for us,” said Guillaume, “not
based on any existing platform, so you do need a certain amount of time, after
the decision was taken, to go ahead with the car. You need to do it right, it’s
going to be our first step in that direction so we don’t want to make any
mistakes.” (Source)

As far as we know, the original 3.3-litre V6 engine from the
concept will drive this new model. At the time, it featured twin turbochargers
and was rated at 390 hp. We don't know if that kind of power will be available
when the Kia GT hits the streets but we bet it won't be far short. It will be
rear wheel drive too.

Kia are being quite ambitious with their new car. It is
aimed directly at the Audi A5 in terms of driving performance, quality and
feel. Size-wise, Kia says it will sit between the A5 and A7 and have no direct
competitor. As we know, size isn't everything but we like where Kia are going
with this.

The Kia GT isn't the only potential new car being actively
progressed through whatever channels the automaker has for moving ideas into
production. There is still the GT4 Stinger Concept that we really, really hope
will be brought to dealerships too one day.

In the meantime, Kia is releasing some very accomplished
2016 models that should satisfy our needs until we learn more. Check out the
current Kia range at Georgetown Kia, 199
and 314 Guelph Street, Georgetown, Ontario.