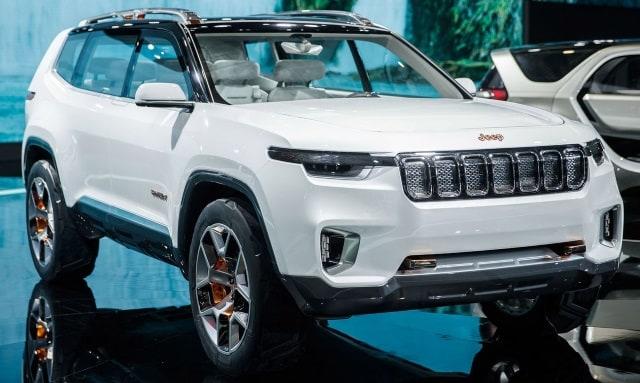 The Jeep Yuntu Concept was displayed at the 2017 Shanghai Auto Show last week and it was an intriguing vehicle. The front end was definitely Jeep, the rest however looked completely different.

The Jeep Yuntu Concept is an Asian-only concept that would only be manufactured and sold to the Asian market. If the production model looks anything like the concept, that would be a great shame. While the typical Jeep influences are there if you look closely, the entire appearance is of a much more modern SUV.

The design is very modern with sharp lines, quite an aero shape, wide hips, high ground clearance and quite a different look to North American models. The front has the signature Jeep grille and wide headlights but the rest of the design looks completely different. The upward curve of the rear quarterlight and the Jeep badge at the rear are the only clues as to this vehicle’s origins. Original alloy wheels, panoramic roof and rear suicide doors all feature too.

On the inside, the interior is a strange mix of grey and light wood. While this is a concept, that idea is certainly a new one and certainly not for Western tastes. The dashboard is one long line across the entire width of the car with a digital display integrated screen in the centre stack, a screen where the glove box would be and screens on the rear of each seat.

The Yuntu concept also features gesture controls, facial recognition in place of a key, push button ignition and drone that checks the road ahead. The drone can also scout out off road terrain were you to take the Yuntu off the tarmac.

The concept’s motor has an electric range of 40 miles and includes wireless charging capability to make life a little easier. No further data was provided on the motor, batteries or other aspects of the drivetrain.

As mentioned at the top, the Jeep Yuntu Concept was designed purely for the Asian family market. Yet, with the exclusion of the interior finishing, this SUV could easily transition to our own shores. Here’s hoping FCA take it to production and make it a global model!