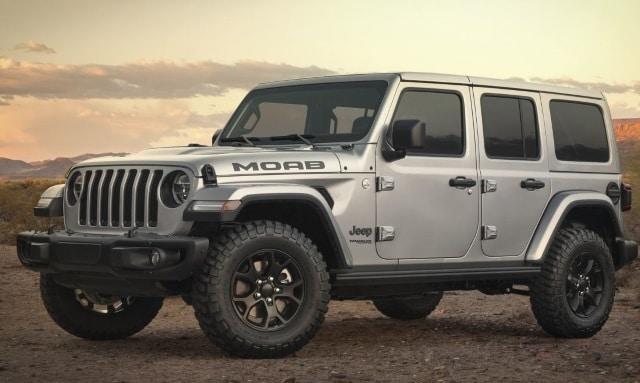 The Jeep Wrangler Moab Edition has broken cover as the first special edition of the new Wrangler. The new Jeep has gone down very well so far if the internet is to be believed and there is no reason to think this special edition will be any different. We have yet to see one for real, but from what we have learned, it looks seriously good!

The Jeep Wrangler Moab Edition is based on a Wrangler Sahara. As the Sahara has the most optional features, it makes sense to use it as the base for expansion. The Moab Edition takes the Sahara and adds 17 inch off road wheels with 32 inch tires, new hood and bumpers, rock rails, two speed transfer case and limited slip differential.

Pricing and availability have yet to be announced.

The design is classic. The signature front end, big fenders, upright stance and rugged design have been recognizable for half a century. Not a lot has changed but a lot has changed. You can still recognize the Wrangler from a mile away yet minor updates keep it looking relatively fresh.

Inside, the cabin is functional and can be specified to be quite luxurious. The core purpose of a Wrangler has to be borne in mind here so the tough materials and simple design don’t deter from what is a superb cabin that perfectly serves the purpose for which the Jeep was made.

Under the hood is either the tried and tested 3.6-litre V6 or the 2.0-litre turbocharged four cylinder. Both use an eight speed automatic transmission and the V6 can have a six speed manual.

The 2018 Jeep Wrangler Sahara is better on road than you might think and definitely better off road than you might fear. It is capable on all terrains and as long as you use the right tires, can cope with anything you throw at it. It is also comfortable as a passenger and has come a long way in terms of ride quality and road handling. Off road handling has never been in question!

The Jeep Wrangler Moab Edition should be with us in the not-too distant future. Otherwise, visit Unique Chrysler Dodge Jeep Ram, 915 Walkers Line, Burlington, ON  L7N 3V8 to check out all versions of the Wrangler.