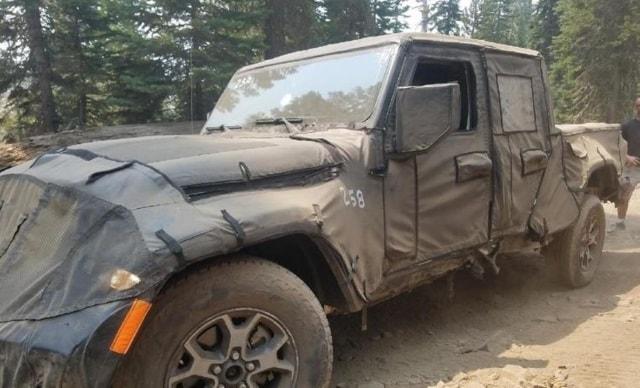 Jeep have confirmed that their pickup Wrangler mashup will be appearing at the LA Auto Show later this month. The truck has been spotted a couple of times being tested but we still don’t know a great deal about it. That will all change soon as it is destined to appear in all its glory at the start of the auto show season.

The LA Auto Show runs from November 26 2018 and will feature the Jeep Scrambler and around 60 other reveals from across the auto industry. It’s a big year for automakers as it seems all of them are unveiling a new model, technology, strategy or direction. One of the things I am most looking forward to is the reveal of this pickup.

Jeep Scrambler
We still don’t know if it’s actually going to be called the Jeep Scrambler or not but the name seems to be the firm favourite right now. The reveal is apparently scheduled for November 28, two days into the show and will unveil the Jeep Scrambler, or whatever it will be called.

From what we have managed to find out from leaks, releases and hints from dealers is that the Jeep Scrambler is going to be a premium pickup with genuine off road ability. It isn’t going to be a full time work truck like the F-150 but a leisure oriented variant that will be able to carry stuff across almost any terrain.

While I personally don’t see the appeal, other Jeep Wrangler fans have been asking for a pickup version for years. The news that Jeep were planning such a move has gone down very well with that part of the fan base and hopefully, they, and the rest of us will like what we see when the curtain comes up on the 28th.

I am also wondering if we will also finally hear about the Jeep diesel engine. The supposed 3.0-litre turbodiesel is supposed to be arriving within the next couple of months and is a logical shoe-in for this pickup as well as the Wrangler. The LA Auto Show might be a good place to finally give us some details on that too.

After having seen the Jeep Scrambler under camouflage for so long and having trawled forums for news or leaks, it will be nice to relax and see the pickup in the flesh. Only three weeks or so to go until then!

In the meantime, the standard Jeep Wrangler is still going strong. Visit Unique Chrysler Dodge Jeep Ram, 915 Walkers Line, Burlington, ON  L7N 3V8 to see it for yourself!