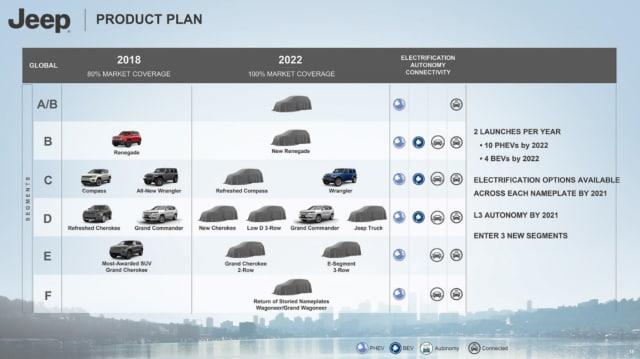 FCA announced its roadmap for the next five years last week. It is always good time to look at where the automaker plans to be and where some of our favourite models are likely to sit within the half decade. I covered the Ram TRX yesterday which also formed part of the plan, today we will discuss what Jeep has in store.

FCA’s five year plans are usually quite detailed and even if they don’t always deliver on everything, they give us a fair idea of what to expect. This time round the plan as a little thinner on detail than previous ones. It still gave us a good idea of what’s coming though.

New Jeep SUVs
The plan outlined four new SUVs that will use the Jeep name. This is part of the earlier commitment to release two new models per year by 2022. We don’t know much about these new models except that one will be the Wagoneer and another will be the Grand Wagoneer. Aside from that, we only know they will include plug-in hybrids and one that will feature Leve 3 automation.

New nameplates
We all know the Cherokee Trailhawk, Trackhawk and Deserthawk are special editions of the SUV. FCA wants to spread that goodness to other models too so we could see a Wrangler Trailhawk or Renegade Trackhawk. The Renegade already has the Deserthawk and the Grand Cherokee has the Trackhawk but under the plans, all models could have all three nameplates and presumably others to bolster its ranks.

Just how far and how wide these new nameplates go is still up for debate as the plan did not specify. I’m guessing if the nameplate’s intent fits the model, it will be thrust upon it.

Future tech
Also part of FCA’s five year plan was PHEV and automation. Plug-in hybrid vehicles will play a part in Jeep’s future as we already know. According to the plan, a total of 10 PHEV models will be released over the next five years along with five car PHEVs.

There will also be Jeeps that have up to Level 3 automation too. Exact models and types were not mentioned but the intent is definitely there. The plan said there will be at least one L3 automated model on release by 2021.

Jeep is playing a significant role in FCA’s future and  we will hopefully begin seeing the fruits of that plan soon!