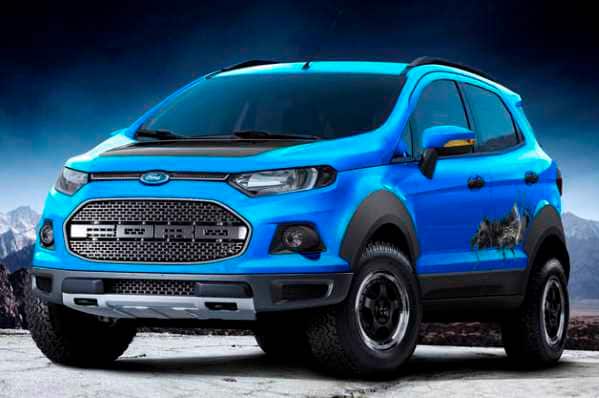 We love
motor shows. They not only give us a glimpse as to what’s coming to the market in
the near future or what new technologies will be coming our way, they also show
us the weird and wonderful. They
showcase the ideas and the direction that auto designers are moving in and gives
us a hint of the kinds of cars we might be driving in the future. The most
recent show, the Sao Paulo Motor Show was a case in point.

The Ford EcoSport Storm concept has a lot of Raptor about it. It’s a custom version of
the EcoSport that has been jacked up, painted a lovely Blue Storm color, had
some custom graphics added and includes a huge front grille that give it a very
unique look.

Add the big
alloys, huge tires, skid plate at the front and you have a very unique
off-roader on your hands. There were also a Beauty and a Beast version. The
Beauty was a copper color with black roof, big alloys with track tires, four separate
bucket seats and an impressive infotainment setup.

The Beast
was white with blue and orange trim, had 18 inch alloys, LED lighting and had a
bike rack in the back instead of seating.

The Nissan
Kicks is another intriguing concept that picks up on the Latin American vibe to
create something innovative. It’s a neat little crossover that looks to be
between a Rogue and a Juke. It has a satin paintjob, gray with orange roof,
painted alloy wheels and unique interior.

Nissan didn’t
give any details about it, but it looks like a Juke, so production wouldn’t be
an impossibility. We like the look and with more automakers fitting new models
between their existing ones across all price points, a production version of
the Nissan Kicks is far from unlikely.

There were
other concepts from Hyundai and Ford but they were for the local market only.
The Hyundai HB20 is a compact that is only for the Latin American market and is
a good looking car. The marque even has an R-Spec model, which is getting some
upgrades.

Also the
locally produced Troller brand which is owned by Ford has released a new model
the T4. It’s an interesting, rugged off-roader that wouldn’t look out of place
in Canada. It might need a bit of cold weatherproofing, but would otherwise be
a hit.