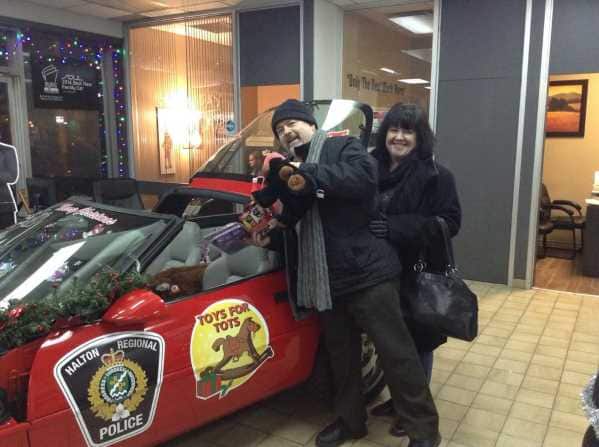 GeorgetownKia and the Oakville Used Car Superstore are both doing their bit for the local
community by helping collect for Toys for Tots. This time of year, it's good to
take a moment to reflect on how fortunate most of us are to have what we have
and to give something to those less fortunate.

That's why
these two Car Nation Canada dealerships are doing all they can to collect as
many toys as possible for this very worthwhile charity. So far, we're doing
pretty good, with a healthy proportion of visitors to our dealerships offering
toys. Some generous visitors have donated more than one!

Our
Georgetown Kia location has a car inside that is acting as the receptacle for
the toys. All you need to do to donate is drop your toy of choice through the
open roof of the car. Oakville are offering something similar.

Toys for
Tots is a charity run by the United States Marine Corps Reserve. The idea is to
distribute donated toys to children whose parents simply cannot afford to
celebrate Christmas and provide gifts for their kids as many of us can. It's a
very worthwhile charity and one Car Nation Canada is happy to support.

The Marine
Toys for Tots Foundation manages the charity. It was formed by former marine
major Bill Hendricks in 1947. His wife had wanted to donate toys to charity but
couldn't find an organization that did it, so Bill set one up. He enlisted some
reservists and managed to collect over 5,000 toys.

He used his
position as Director of Public Relations for Warner Brothers Studio to raise
awareness and launched the charity proper in 1948. Since then, Toys for Tots
has collected an estimated 500 million toys.

If you have
a toy you would like to donate to this most worthy of charities, drop by either
Georgetown Kia or the Oakville Used Car Superstore. We would be happy to take
the toy and make sure Toys for Tots gets the benefit of it.

GeorgetownKia is at 314 & 199 Guelph Street, Georgetown, Ontario and Oakville UsedCar Superstore is at 1450 Speers Road, Oakville.