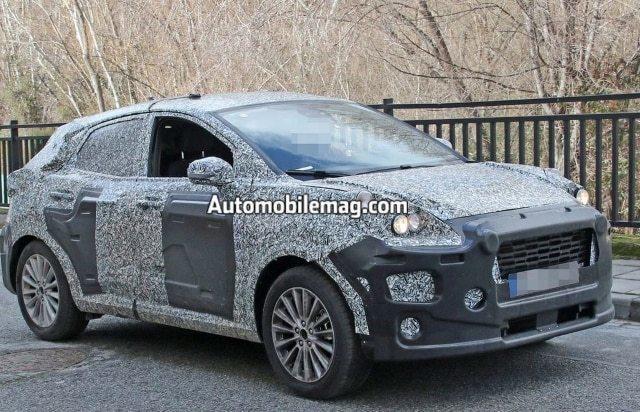 Another bunch of spy shots and another collection of rumours and speculation. This time around the popular small SUV from Ford, the EcoSport. Also spied last week and also in the snow, the next Ford Eco Sport has been caught road testing out in the wild.

According to Automobilemag that featured the spy shots, this is definitely an upcoming Ford EcoSport. It looks very different than the current model, with much more of a car-like appearance. That is partly because it is built on the Fiesta platform and partly because it is using the Focus as inspiration.

Ford EcoSport
As you can see, the car is heavily camouflaged so you can’t see a great deal except the outline. It has a very laid back profile with low front end, integrated lights, large grille, very raked windshield, curving roof and rounded rear end. There is definitely a lot of Focus in the DNA with a slightly more upright stance and better ground clearance.

We don’t know anything else about this car. We don’t know the engine, the drivetrain, potential configurations or even if it will still be called the EcoSport. I’ll keep an eye on things and let you know if I learn more.

2019 Ford EcoSport
The 2019 Ford EcoSport is a small SUV with a big heart. It’s spacious, drives like a car and has all the benefits of ride height and great visibility. It’s a good seller for Ford even if it doesn’t shift as many units as the Explorer.

Available in S, SE, SES and Titanium trims, the EcoSport has a good internal configuration, decent interior space, high levels of comfort and finishing and enough technology that you don’t feel left behind by its larger siblings. With enough room for four, or five if a couple of you are smaller, it’s big enough for family life without the encumbrance of a full SUV.

The drivetrain options include a turbocharged 3 cylinder 1.6-litre engine that produces 123 hp or similar four cylinder that produces 166 hp. Both use a six speed automatic transmission to send drive to the front wheels. AWD is an option and allows the EcoSport to tow up to 2,000 pounds.

Overall, the 2019 Ford EcoSport is a solid crossover with carlike manners and the benefit of decent interior space. With frugal yet, peppy engines and the option for AWD, it’s a decent option for suburban families.