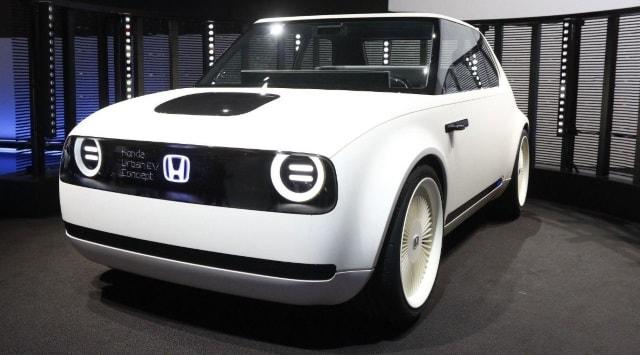 Last week was the Frankfurt Auto Show, or the Internationale Automobil-Ausstellung (IAA) to locals. As one of the largest auto shows in the world it was definitely a show to go and see. Despite some big names giving it a miss this year there were still lots of shiny vehicles to see.

The theme of this years’ show was ‘The future now’ and boy did the automakers take that to heart. We had some seriously cool concepts, a self-driving chopper taxi, lots of EVs, SUVs and cars of all shapes and sizes.
As wacky as some of the designs were, the names of some of them took some pronouncing too. The Volocopter, Renault Symbioz, Borgward Isabella and the Audi Aicon were a few of the strange names that appeared at the show.
The cars of the show
Aside from the Kia Proceed Concept which I’ll talk about tomorrow, there were some seriously cool and some seriously futuristic vehicles on show. A couple give me serious hope for the future of the auto industry. They manage to be green but also powerful and great fun.
The Mercedes-AMG Project One for example. Over 1,000 hp from a 1.6-litre V6 engine that redlines at 11,000 RPM. With a series of electric motors and battery packs to help boost output, this is the kind of green car I could get behind. Just listen to that engine!
The Audi RS4 Avant is a dream car of mine. A wagon that you can fill with kids or cargo and yet outperform a Mustang or Porsche 911. In this guise, the 2.9-litre V6 delivers 450 hp and 443 lb-ft torque and delivers it to all wheels through the still amazing Quattro system.
The Honda Urban EV Concept at the other end of the spectrum was equally impressive but for completely different reasons. This is a cute car that would sit very well in the city streets of Ontario. I like this little Mark One Golf lookalike with its widescreen instrument panel and colour-coded wheels.
The aforementioned Borgward Isabella Concept is likely a car you have never heard of. I had heard of the manufacturer but not this model. This is a pure concept with a fantastic design complete with retro two-tone paint job. An engine and transmission that don’t yet exist and suicide doors that will never see production. Aside from that, it looks ready for the road!
It was a shame that some of the bigger names didn’t show at Frankfurt. But do you know what? There was enough super-cool stuff here that we didn’t really miss them. While I was initially concerned that those absences could potentially see the death of the auto show, having been to Frankfurt and seen what the show was like, I no longer think that’s the case. The auto show will most definitely go on!